The Blues thrashed Schalke 5-0 in Germany last month to book their place in the last 16 of the Champions League and are guaranteed to progress as group winners as they hold a four point lead over Sporting going into tonight’s game.

Jose Mourinho’s side saw their unbeaten start to the season ended with a 2-1 defeat away at Newcastle on Saturday but the Portuguese coach insists his squad are still in excellent shape, and it’s hard to argue considering they remain top of the Premier League table and in the hat for the knockout stages in Europe.

A Nemanja Matic header settled things in the reverse fixture in Portugal back in September and the Blues would take repeat result to get back to winning ways and finish the group stages off with another three points.

Sporting arrive in London knowing they only need a point to book their place in the last 16 at the expense of third-placed Schalke – who have to beat Maribor in tonight’s other group D game to stand any chance of progressing.

Chelsea have no fresh injury concerns to deal with but Mourinho has decided to take this opportunity to rest a few of his key men.

Skipper John Terry will sit this one out so Kurt Zouma is expected to start alongside Gary Cahill at the back.

Eden Hazard and Willian have also been rested for the game so Andre Schurrle and Mohamed Salah should come back in to the attack.

Petr Cech, Ramires and Filipe Luis will also be hoping for run outs, while teenage midfielder Ruben Loftus-Cheek is expected to play some part in the game.

Cesc Fabregas would usually be rested but with the Spaniard suspended for Saturday’s clash with Hull, he’s expected to start alongside the returning Matic in midfield.

Mourinho has confirmed that Diego Costa will start up front, so Didier Drogba will have to make do with a place among the subs. 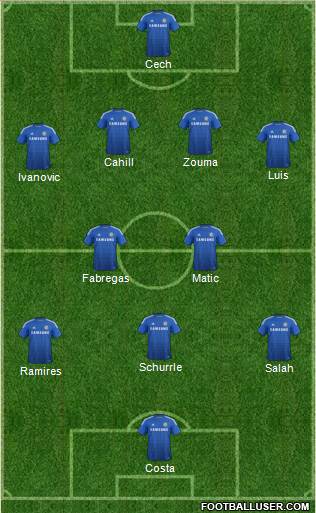 Chelsea 2-0 Sporting Lisbon: Despite making several changes to their starting eleven, Chelsea are still able to field a strong side and I’d expect them to have too much for Sporting Lisbon this evening.