Liverpool will be looking to get their season back on track when they take on Man Utd at Old Trafford. Here is the side I think Brendan Rodgers will select:

Liverpool will be looking to get their season back on track when they take on Manchester United at Old Trafford on afternoon. Here is the side I think Brendan Rodgers will select:

Goalkeeper: Despite coming under some fierce criticism this season, Simon Mignolet will continue to keep goal this weekend.

Defence: Rodgers is expected to make a couple of changes at the back with Jose Enrique set to drop out after his disappointing display during Tuesday’s 1-1 draw with Basel that saw him subbed at half-time. Alberto Moreno is likely to come in along with the fit-again Kolo Toure, who should replace Dejan Lovren in the heart of the back four.

Midfield: Joe Allen could make way for Emre Can with the German fresh having been left out in midweek. Steven Gerrard is expected to play his second game in succession as this match is far too important to even consider resting the skipper, and he’ll likely play in a more advanced position once again with Jordan Henderson playing from the right as he has done in recent weeks.

Attack: Mario Balotelli is back in contention having returned to full training and the newspapers think Rodgers will take a risk by starting the Italian this weekend with Rickie Lambert given a well-earned rest. Raheem Sterling is another option through the middle if Balotelli is deemed too unfit to start, with the England youngster deployed in a striking role against Basel on Tuesday.

Here if how I think we’ll see Liverpool line-up: 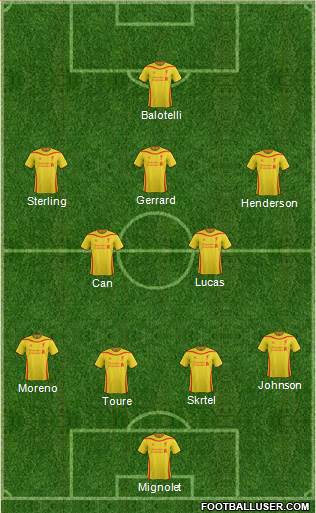