With the January transfer window fast approaching managers are formalising their plans to strengthen their squads ahead of the second half of the season, so we’ll bring you all the latest news and gossip. Today, Gareth Bale is said to be keen on a big-money move to Man Utd…… 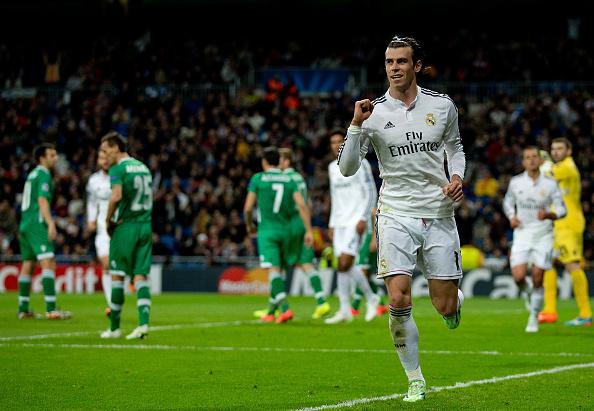 Gareth Bale has given the go-ahead for a sensational €100m move to Old Trafford as Manchester United plot to bring the Welshman back to the Premier League, according to reports.

United were strongly linked with a move for Bale when he left Tottenham Hotspur in the summer of 2013 before he eventually snubbed a move to Old Trafford in favour of a switch to Spain.

The 25-year-old enjoyed an excellent debut season in La Liga as his 22 goals in 44 games helped Madrid land their 10th European cup as well as push Atletico Madrid all the way in the title race.

However, Bale’s importance in Carlo Ancelotti’s side has come under scrutiny following the arrival of James Rodriguez in the summer and there have been rumours suggesting the Welshman may be ready to cut-short his time in Spain with Madrid eyeing Marcos Reus as his replacement.

Reports earlier this month claimed that Manchester United were ready to renew their interest in the attacker and it seems the 20-time Premier League champions have now been handed a major boost in their pursuit.

The Express claim that Bale has given the ‘green light’ to a sensational move to Old Trafford after being made aware of United’s interest as he feels a move back to England is best for him and his family.

The newspaper suggests that Louis van Gaal is a huge fan of the player and United bosses are willing to smash their transfer record to pay the €100m (£80m) that Madrid will demand for Bale’s signature.

However, any potential deal is going to have to wait as there is virtually no chance that Madrid will agree to sell in January, so United are now preparing themselves for another huge summer of investment with Bale seemingly their key target.

It would certainly be a sensational coup if United could pull it off and the Red Devils have the financial muscle to be able to afford such a move. It appears Bale is open for the move, if you believe what the Express are reporting today, but a lot could depend on whether Madrid are able to close out a deal for Reus.

If the Champions League holders can secure the Germans signature, then it would certainly open the door for Bale to leave and Madrid have shown in the recent past with the sale of Angel Di Maria that they aren’t afraid to cash-in on their best players.