Liverpool will be looking to close the gap on the top four when they take on Burnley at Turf Moor on Friday. Here is the side I think Brendan Rodgers will pick

Liverpool will be looking to close the gap on the top four when they take on Burnley at Turf Moor on Boxing Day. Here is the side I think Brendan Rodgers will select:

Goalkeeper: Rodgers has taken the brave decision to drop Simon Mignolet for the foreseeable future so Brad Jones is expected to continue in goal on Friday.

Defence: Glen Johnson has been ruled out for a month after suffering a groin injury against Manchester United so he’ll continue on the sidelines with Jon Flanagan. Rodgers has played three at the back in recent weeks so we expect him to do likewise against Burnley which should see Kolo Toure, Martin Skrtel and Mamadou Sakho retain their places as Dejan Lovren is a doubt with a groin problem.

Midfield: Rodgers went with Lazar Markovic on the left wing against Arsenal but I think we might see Alberto Moreno come in to offer more protection away from home and to give you the young Serb a rest. There is a chance Steven Gerrard may also be given a breather but with a home clash against Swansea on Monday, the skipper may be left out at Anfield instead. Lucas Leiva is back in favour and should keep his place along with Jordan Henderson with Joe Allen still injured.

Attack: Mario Balotelli is back in contention after serving his one-match ban but the Italian is likely to be named among the substitutes with Raheem Sterling continuing up front in the absence of Daniel Sturridge. Philippe Coutinho continued his fine form with a goal-scoring display against the Gunners and should retain his place in attack along with Adam Lallana, but Fabio Borini is suspended. 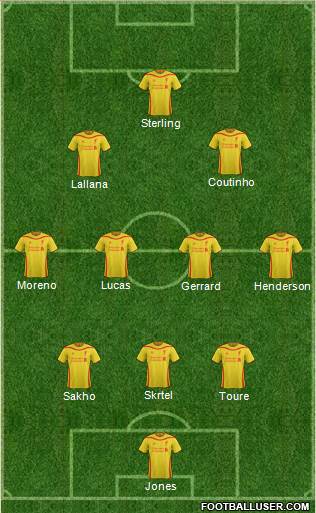