Chelsea will be looking to extend their lead at the top of the table when they take on West Ham on Boxing Day. Here is the side I think Jose Mourinho will pick

Chelsea will be looking to extend their lead at the top of the table when they take on West Ham at Stamford Bridge on Boxing Day. Here is the side I think Jose Mourinho will select:

Goalkeeper: Thibaut Courtois was recalled to the starting eleven against Stoke so should continue there on Friday with Petr Cech once again on the bench.

Defence: With two tricky away games against Southampton and Tottenham up next, Mourinho may opt to rest Cesar Azpilicueta with Filipe Luis starting at left-back. John Terry may be given a breather over the next two games but I’d expect him to face the Hammers and start alongside Gary Cahill and Branislav Ivanovic at the back.

Midfield: Cesc Fabregas continued his excellent form with a goal and an assist against Stoke last time out but he could drop back into a deeper role alongside Nemanja Matic on Friday with John Obi Mikel missing out.

Attack: That would allow Oscar to be recalled after he was left out against the Potters on Monday while Willian could also come back in to the attack. Eden Hazard is a doubt with an ankle injury and with plenty of important games coming up, I don’t think Mourinho will take any chances with the Belgian so Andre Schurrle could keep his place. Diego Costa is likely to be rested on Sunday but he should lead the line against West Ham on Boxing Day. 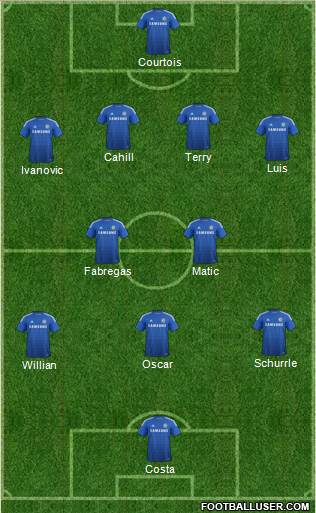