Arsenal will be looking to climb into the top four when they take on West Ham at the Emirates on Sunday afternoon. Here is the side we think Wenger will select:

Arsenal will be looking to climb into the top four when they take on West Ham at the Emirates on Sunday afternoon. Here is the side Gooner Mac thinks Arsene Wenger will select:

Goalkeeper: Wojciech Szczesny has performed adequately since returning to full fitness from a pelvic injury so I expect the Pole to once again start on Sunday.

Defence: Laurent Koscielny has a chance of returning to the side after struggling with a calf problem in recent weeks. The Frenchman could resurrect his partnership alongside Per Mertesacker at the heart of defence. Mathieu Debuchy could do with a rest having started the last four games following three months out with an ankle injury so Calum Chambers could come back in at right back.

Midfield: Arsene has very few options to rotate in the middle of the park as Mikel Arteta, Jack Wilshere and Aaron Ramsey all remain unavailable through injury. Alex Oxlade-Chamberlain was rested against QPR so it’s likely he’ll get a recall in place of Tomas Rosicky. The Czech international played well on Friday but he won’t be fit enough to start twice in three days.

Attack: Theo Walcott is pushing for a recall but I think we’ll see him off the bench tomorrow. Olivier Giroud is suspended following his needless sending off against QPR so Danny Welbeck is likely to lead the line with Lukas Podolski coming into the side on the left. Arsene Wenger doesn’t look like he’s ready to rest Alexis Sanchez any time soon so he’ll most likely start on the right. 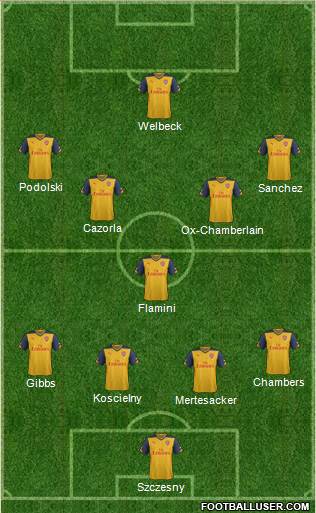