Chelsea get back to league action when they take on Newcastle at Stamford Bridge on Saturday afternoon. Here is the side I think Jose Mourinho will select:

Chelsea will be looking to get back to winning ways in the Premier League when they take on Newcastle United at Stamford Bridge on Saturday afternoon. Here is the side I think Jose Mourinho will select:

Goalkeeper: Thibaut Courtois is expected to shake-off a minor finger injury to replace Petr Cech in goal after being left out for the FA Cup win over Watford last weekend.

Defence: Mourinho will recall several of his first team regulars after resting some key men last time out. Skipper John Terry will come back in to the defence alongside Gary Cahill with Kurt Zouma dropping out, while Branislav Ivanovic will also return to the starting eleven. This should see Filipe Luis drop to the bench with Cesar Azpilicueta moving to left-back.

Midfield: Both Cesc Fabregas and Nemanja Matic were rested against Watford so the duo are expected to be recalled in midfield with John Obi Mikel and Ramires dropping back down to the subs bench.

Attack: Mourinho has no injury or suspension issues to deal with so Eden Hazard and Willian should come back in join Oscar in the attack. Andre Schurrle is likely to make way while Loic Remy may miss out starting against his former club. Diego Costa was rested last weekend so the Spaniard will start up front with Didier Drogba dropping out. 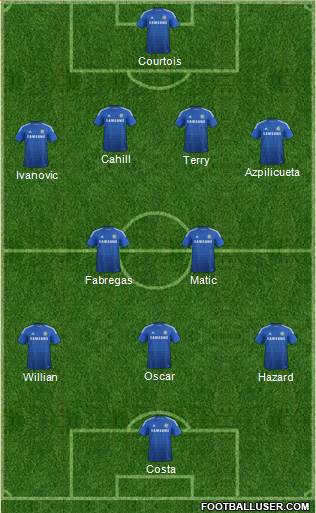