Arsenal will be looking to push for the top four when they take on Manchester City on Sunday afternoon. Here is the side I think Arsene Wenger will select:

Arsenal will be looking to push for the top four when they take on Manchester City at the Etihad on Sunday afternoon. Here is the side Gooner Mac thinks Arsene Wenger will select:

Goalkeeper: It’s going to be interesting to see who Arsene goes with in goal. Wojciech Szczesny has been left out for the last two matches after his disappointing display against Southampton so David Ospina is favourite to continue between the sticks on Sunday.

Defence: The boss is going to be forced into making one change at the back as Mathieu Debuchy has been ruled out for three months after having surgery on a shoulder injury. Kieran Gibbs faces a late fitness test on a heel injury but even if he’s passed fit Wenger could stick Nacho Monreal after praising the Spaniard for his consistency today. Calum Chambers will be back from sickness but will have to make do with a place on the bench as Hector Bellerin is expected to start at right-back.

Midfield: Aaron Ramsey was back on the bench last week after a month out with a hamstring injury so the Welshman could get a recall to the starting eleven this weekend with Tomas Rosicky the man most likely to make way. Mathieu Flamini is also pushing for a recall but Francis Coquelin kept his place against Stoke last week so I wouldn’t be surprise to see him start again on Sunday, but Mikel Arteta has been ruled out for up to three months with an ankle injury.

Attack: Theo Walcott stepped up his comeback with another cameo off the bench last week but he’s still showing signs of being rusty so I think Alex Oxlade-Chamberlain will continue on the right wing. Mesut Ozil played his first 15 minutes against Stoke after three months out but I also think it’s too soon for him to start so Santi Cazorla should continue in a central role. Alexis Sanchez will once again play off the left with Olivier Giroud starting up front as Danny Welbeck has been ruled out for another two weeks with a thigh problem. 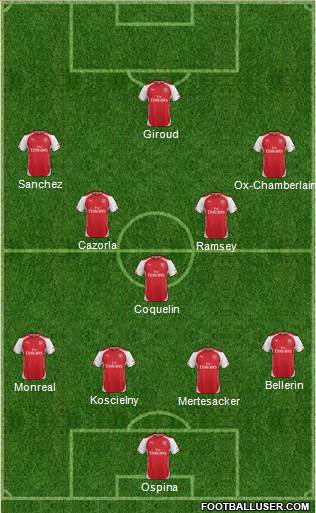