Chelsea & Liverpool Ready To Battle It Out Over €40m Argentinean

Chelsea and Liverpool are ready to battle it out over the signature of Mauro Icardi after his contract extension talks with Inter Milan broke down.

With the January transfer in full swing, managers are strengthening their squads ahead of the second half of the season, so we’ll bring you all the latest news and gossip. Today, Chelsea and Liverpool are linked with Mauro Icardi…. 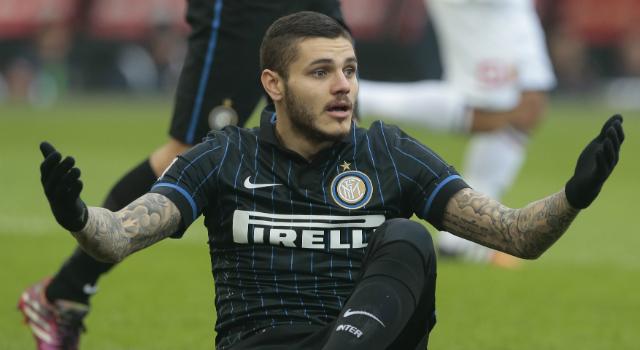 Chelsea and Liverpool are ready to battle it out over the signature of Mauro Icardi after his contract extension talks with Inter Milan broke down, according to reports.

Icardi joined Inter from Sampdoria in 2013 and has been enjoying an excellent campaign with 14 goals in his 24 appearances in all competitions so far.

The Serie A giants are keen to reward him for his fine form with a new contract and it’s believed the club opened negotiations with the 21-year-old’s representatives late last week.

However, the Express claim those talks have already broken as Icardi is demanding a huge pay-rise and with finances tight at the San Siro, Roberto Mancini is understood to be ready to cash-in on the  striker this month if a club meets their €40m (£30m) valuation.

Inter have been busy in the transfer window after signing Lukas Podolski on loan from Arsenal while Xherdan Shaqiri has also arrived from Bayern Munich, so they have plenty of options in attack if Icardi was to leave.

The news have supposedly alerted Chelsea and Liverpool with the Express suggesting that both Jose Mourinho and Brendan Rodgers are keen on bringing Icardi to the Premier League this month.

Chelsea are currently flying high at the top of the table but with Didier Drogba set to retire at the end of the season, Mourinho is going to need to find a replacement and it appears he’s identified the Argentinean international as a potential target.

Liverpool have struggled for goals this season while Daniel Sturridge has been out injured and with doubts continuing over the future of Mario Balotelli, Rodgers could be on the look-out for another forward to replace the Italian should he secure a move away from Anfield.

Icardi would certainly be an exciting signing as he’s one of the most promising young strikers in Europe. He’s still only 21 so has his whole career ahead of him and no doubt he’s only going to improve over the coming years.

However, €40m isn’t anything to be sniffed at I don’t see either Chelsea or Liverpool being prepared to pay that kind of money for the youngster just yet, but we’ll have to see how things develop. I personally think any move will only happen in the summer…