Chelsea will be looking to avoid an upset when they face Bradford at Stamford Bridge in the FA Cup on Saturday. Here is the side I think Jose Mourinho will pick

Chelsea will be looking to avoid an upset when they take on Bradford at Stamford Bridge in the FA Cup on Saturday afternoon. Here is the side I think Jose Mourinho will select:

Goalkeeper: Thibaut Courtois was recalled for Tuesday’s 1-1 draw at Liverpool in the League Cup so I think we’ll see Petr Cech come back in to the starting eleven on Saturday.

Defence: Mourinho is expected to rest skipper John Terry with Kurt Zouma a cert to start in central defence and the youngster will likely be partnered by Gary Cahill at the back. Filipe Luis should also start at left-back while Andreas Christensen could come in an fill-in at right-back if Mourinho wants to rest Branislav Ivanovic with Cesar Azpilicueta still not 100% fit.

Midfield: I think we’ll see a very similar midfield and attack to the side that faced Watford in the previous round. That will see Cesc Fabregas and Nemanja Matic rested with John Obi Mikel and Ramires starting in central midfield.

Attack: The Likes of Eden Hazard and Diego Costa are also expected to be rested with Loic Remy and Andre Schurrle coming in to support Didier Drogba in attack. Oscar was left on the bench on Tuesday so he’s likely to come back in to start this weekend. 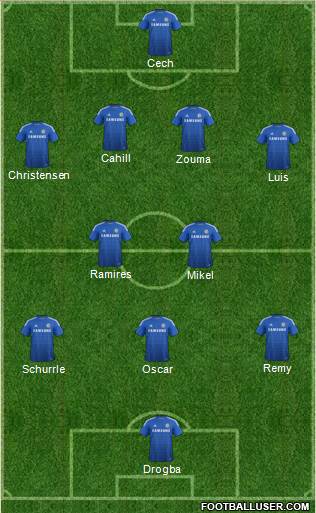