Manchester United will get back to Premier League action when they take on Leicester City at Old Trafford on Saturday afternoon. Here’s the starting eleven I think Louis van Gaal will go with:

Goalkeeper: David De Gea has been United’s most consistent performer this season and there’s no doubt he’ll continue between the sticks this weekend.

Defence: van Gaal will hand late fitness tests to Jonny Evans and Chris Smalling but assuming neither of them are passed fit, I think we could see Michael Carrick drop back into the defence. Marcos Rojo and Phil Jones should retain their places in a back three with Luke Shaw starting in the left wing-back position after recovering from injury.

Midfield: With Carrick at the back, Daley Blind could start in midfield – although van Gaal could easily decide to swap the two players, such is their versatility. Angel Di Maria could start in a central role with Shaw and Rafael in the wide positions, which would mean the likes of Marouane Fellaini and Ander Herrera would miss out.

Attack: Robin van Persie is expected to be recalled to the starting eleven after coming off the bench against Cambridge last time out. Wayne Rooney will also come back in with James Wilson and Radamel Falcao both dropping to the bench. Juan Mata should start in the ‘hole’ behind the front two. 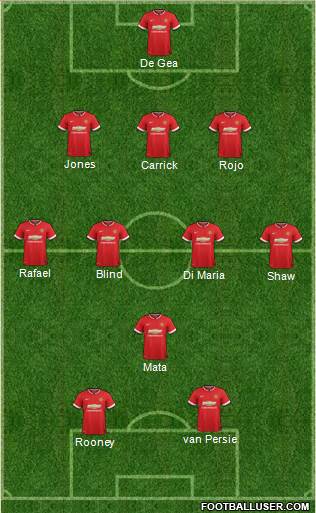