Man Utd will look to get back to winning ways when they entertain Burnley at Old Trafford on Wednesday night. Here’s the side I think Louis van Gaal will pick

Manchester United will look to get back to winning ways when they entertain Burnley at Old Trafford on Wednesday night. Here’s the starting eleven I think Louis van Gaal will go with:

Goalkeeper: No decision to be made in goal. Victor Valdes is an able deputy but David De Gea is the established No.1 and will once again start in between the sticks.

Defence: van Gaal will be forced into making at least one change at the back line as Luke Shaw is suspended following his sending off against West Ham on Sunday. Marcos Rojo is the man most likely to deputise at left-back although Ashley Young could also be under consideration. If Rojo moves across then Jonny Evans could come in to partner Phil Jones in the middle of defence with Antonio Valencia continuing at right-back.

Midfield: With Michael Carrick out injured, Daley Blind should continue in the holding role while Marouane Fellaini could be recalled in place of Adnan Januzaj after coming on to set up United’s equaliser against the Hammers – although van Gaal has been forced to defend his ‘long ball’ style at his press conference this afternoon. Wayne Rooney is expected to continue in his deeper midfield role.

Attack: Robin van Persie should keep his place up front but Radamel Falcao could make way after another frustrating outing at Upton Park. This could see Juan Mata come in to the side with Angel Di Maria deployed in a more advanced role. 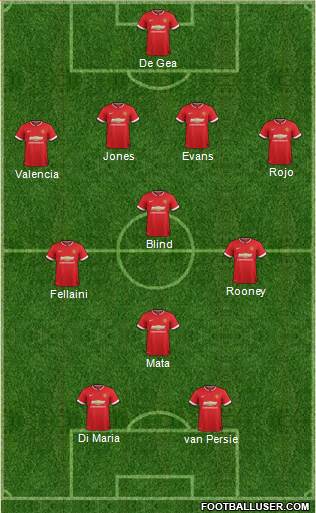