4 Observations From Arsenal’s 2-1 Win At QPR

Arsenal secured a 2-1 victory over QPR on Wednesday night to maintain third place in the table. Here are four improvements Gunner33 saw in the Arsenal display

Arsenal secured a hard fought 2-1 victory over Queens Park Rangers on Wednesday night to maintain third place in the table. Here are four improvements Gunner33 saw in the Arsenal display…. 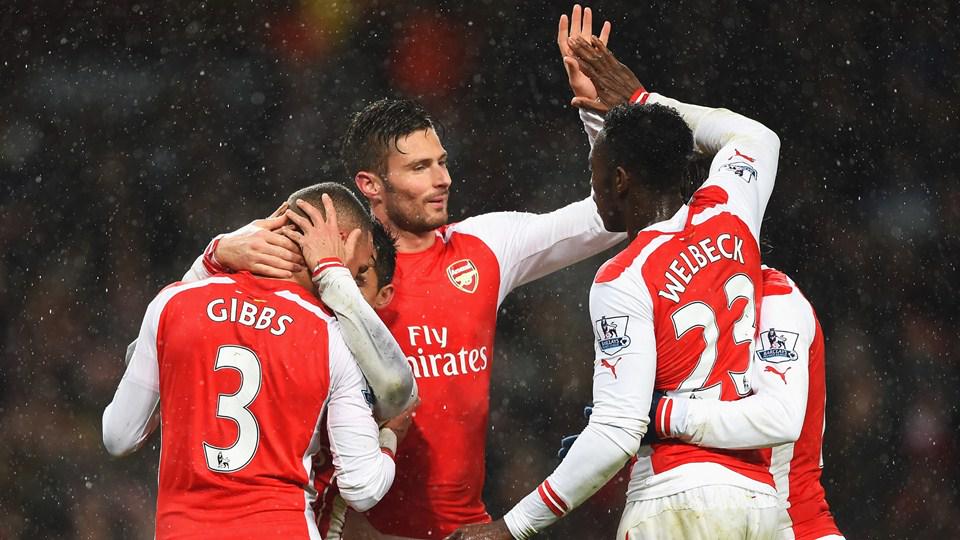 Securing a sound three points at home to Everton on Sunday, Arsenal were looking to continue their impressive league form at Loftus Road against a struggling QPR side. Ahead of the vital FA Cup encounter with Man United on Monday, Wenger started Brazilian Gabriel alongside the man he replaced at the weekend, Mertesacker, whilst Rosicky returned in place of Oxlade-Chamberlain.

Both Austin and then Phillips saw efforts saved by Ospina in the early stages, before a barrage of knocks from Zamora told for Gabriel, the Brazilian limbering off mid-way through the first half, with Koscielny the man to come on.

After a relatively nervy first half had culminated in a stalemate at the break, despite Cazorla striking late to scare Green with Arsenal’s best chance of the game so far, the Gunners made sure they would start on the front foot in second half.

Fifteen minutes into the restart and the Gunners had done just that, breaking the deadlock courtesy of Olivier Giroud. Sanchez pulled a divine ball back to Gibbs after a darting run down the flank, the full-back’s effort cannoned off Hill into the path of the Frenchman who slid home the opener.

Failing to make an impact in the first forty-five, the visitors had snatched two in a matter of minutes, doubling their lead via Alexis Sanchez, less than five minutes after Giroud’s strike. Young full-back Furlong was having a day of it with Sanchez’ mystifying runs and after driving the defender back into his box yet again, the Chilean dispatched from a difficult angle to double the Gunners’ lead in sublime style.

Moments after Ozil was denied the chance to hand Arsenal a third by the woodwork, the hosts found a way back into the game, with a well-deserved consolation. A snapshot of school-boy defending from the Gunners defence left Austin with plenty of space to turn and lash home QPR’s first of the night.

The goal provided no more than a late scare and the victory means Arsenal have extended their league winning-streak to four, heading into the forthcoming cup tie.

Crunch time in the league fast approaching,it is important the Gunners are to get everything right and here are some improvements I noted from this particular outing:

Dropping Per in the weekend game was always going to have an impact on the centre-half, but it seems Wenger’s decision may have paid dividends. Many would have expected the axing of Mertesacker from the first eleven to forge a solid partnership between Koscielny and Gabriel at the heart of defence, but instead the German was able to marshall the back-line comfortably alongside either of the pair, with Gabriel suffering injury early in the game.

The BrazilIan could learn an awful lot from Mertesacker who, on a smaller pitch against physically able opposition, thrived to put in a much-improved performance. Keeping the likes of Zamora and, for the most-part, Austin at bay, it seems the rest may have shaken Mertesacker up a little.

Although Cazorla was far from his best, the Arsenal midfield was more reserved against the Hoops and resisted the temptation to pile bodies forward, such is the norm. Coquelin especially was consistent throughout the clash to move the ball from back-to-front and he looked at home amid the intense, tight battle in the middle.

It seemed a case of simply shifting the ball into the feet of Sanchez, Ozil and Giroud, as opposed to the midfield venturing forward themselves. As a result, possession [57%] was on the up compared to recent matches and Rosicky especially shielded the ball well to deny QPR the ammunition to attack with.

Giroud’s Role In The Shadows

By no means at the hub of play, Olivier Giroud managed to snatch a goal despite little time with the ball at his feet. At times Sanchez acted almost as a distraction, leading full-back Furlong out of position on a number of occasions; this meant QPR’s back-line would need to shift across and cover, leaving plenty of space for Giroud to pick up in the centre.

The forward may not have pace on his side but, much like his counterpart in this game Zamora, he is able to bully defenders and get ahead of them in aerial battles or a six-yard box scramble. His goal was a prime example of picking up a brilliant position. Ultimately, it re-iterates that he is far better off grabbing a goal with little time on the ball in a quiet game, rather than being at the forefront of the action and mis-firing a catalogue of chances.

Whatever the current opinion surrounding the much-scrutinised Arsenal boss may be, it is clear that after a mundane first period, the words from Wenger sparked a response from the Gunners after the interval.

The half-time talk must have especially had an effect on one Alexis Sanchez who emerged from the tunnel a changed player in the second forty-five, looking far more dangerous and eager to have a crack at goal. Meanwhile, at the other end, the defensive unit looked to consolidate and reduce QPR’s shooting tally as much as possible and this provided foundations to build on for the rest of the game.

One to forget very quickly, the first half was an exceptionally nervy spell from Arsenal, but an important result came to fruition come the end of the ninety, thanks to Wenger’s revitalisation of the lads.

Not exactly a blockbuster performance but three crucial points accumulated and, at this point in the season, that is all that matters. The team can now put league advances on hold and turn their attention to the cup-tie with United, where we could push one step closer to defending our FA Cup title. COYG!