Manchester United and Liverpool target Eduardo Salvio is holding talks with Benfica about a new deal that could see his €60m release clause reduced.

The January transfer window may be closed but that won’t stop the newspapers from speculating ahead of the summer so we’ll bring you all the news and gossip. Today, Man Utd and Liverpool are linked with Eduardo Salvio…. 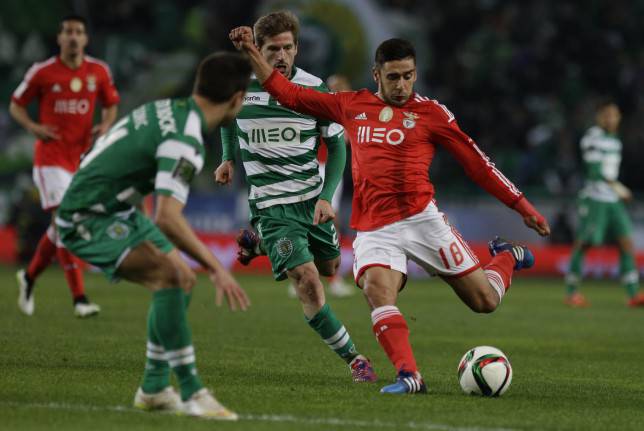 Manchester United and Liverpool target Eduardo Salvio is holding talks with Benfica about a new deal that could see his €60m release clause reduced, according to reports.

Salvio has been in excellent form for Benfica since making the move from Atletico Madrid in 2012 and has racked up 37 goals and 26 assists during his 142 appearances in Portugal so far.

His impressive displays have led to interest from the Premier League with Manchester United and Liverpool strongly linked with a move for the Argentinean winger in recent months.

The Mirror claim that United boss Louis van Gaal sent scouts to the Estadio da Luz last weekend to watch Salvio put in another solid shift during Benfica’s 2-0 win over Sporting Braga while Brendan Rodgers is also understood to be making regular checks on the 24-year-old.

The duo will now have been alerted to the news that Salvio has entered into talks about extending his contract by another year with the Mirror claiming his agent Agustin Jimenez held talks with Benfica chiefs on Sunday and Monday.

However, the newspaper suggests that the attacker is keen to secure a move away from Portugal this summer so will only agree to sign the extension if his €60m (£43m) release clause is reduced, as he hopes that will help facilitate a big-money move at the end of the season.

Salvio’s current deal expires in 2017 so I’m sure Benfica will be keen to see it extended, but I’m not sure they will agree to hand him a new deal if it meant his release clause was reduced. Surely they’d prefer just to cash-in this summer as they’ll be able to demand a higher fee due to his €60m clause?

It’s going to be interesting to see how this develops over the coming weeks but if Salvio does ends up at either Old Trafford or Anfield this summer, then Utd or Liverpool would be getting a pacey attacker who would certainly excite the fans and pose a real goal threat next season.