Manchester United and Liverpool will have to fight it out with several other clubs if they want to sign Barcelona full-back Dani Alves this summer.

The January transfer window is now closed but that won’t stop the newspapers from speculating ahead of the summer so we’ll bring you all the news and gossip. Today,  Man Utd and Liverpool are set to battle it out over Dani Alves…. 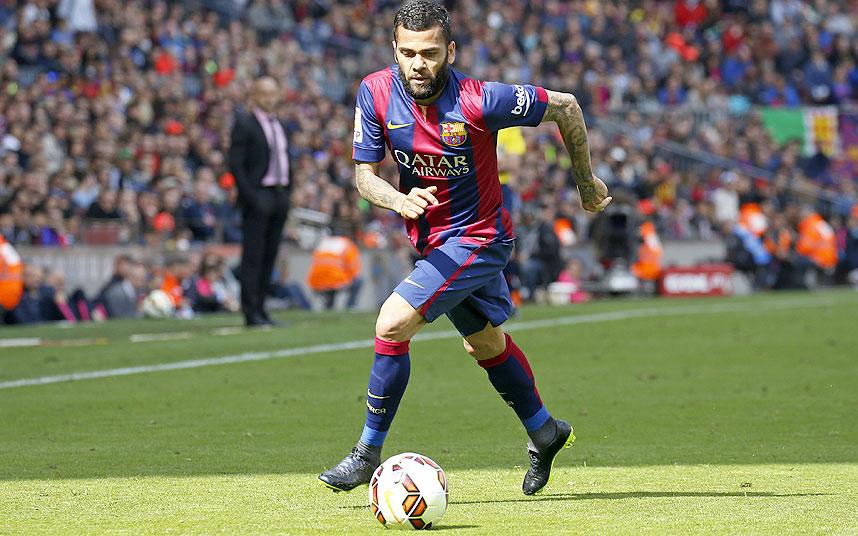 Manchester United and Liverpool will have to fight it out with several other clubs if they want to sign Barcelona full-back Dani Alves this summer, according to reports.

Alves has been at Barca since moving to the Nou Camp from Sevilla in 2008 and has been widely regarded as one of the best full-backs in world football over the past seven years.

The Brazilian international has been a mainstay in the Catalans defence, helping them to numerous top honours including 4 La Liga titles, 2 Copa del Rey’s and 2 Champions League trophies.

However, the 31-year-old is out-of-contract at the end of the season and so far no extension has been agreed, despite Barca being keen on tying him down to fresh terms.

The uncertainty over his future has led to interest from the Premier League with the Mirror claiming that Manchester United and Liverpool are both desperate to try and lure him to England on a free transfer this summer.

The newspaper suggests that United boss Louis van Gaal has put together a bumper contract offer that includes sizeable wages as well as a hefty signing-on bonus in a bid to persuade Alves to opt for a move to Old Trafford.

Liverpool boss Brendan Rodgers is also understood to be keen and he’s likely to see Alves as the perfect fit for his right wing-back role in his new 3-4-3 formation at Anfield.

However, it seems the England giants aren’t the only one’s in the running as the Mirror claim that PSG, Inter Milan, Juventus and Borussia Dortmund are also showing strong interest in the Brazilian international, while Barcelona haven’t given up hope of agreeing a new deal to keep him in Spain.

Alves may be the wrong side of 30 but he’s still as fit as ever and while he may not be the best out-and-out defender, he offers so much going forward as he’s chipped in with 20 goals and 88 assists during his 329 appearances for Barca.

He’d obviously be an exciting signing for either Man Utd or Liverpool and it would be great to see him plying his trade in the Premier League next season, but I have a feeling Alves will end up agreeing a new contract with the Catalans.