Arsenal will be looking keep the pressure on Man City when they take on Hull on Monday night. Here is the side Gooner Mac thinks Arsene Wenger will select:

Arsenal will be looking keep the pressure on Man City when they take on Hull on Monday night. Here is the side Gooner Mac thinks Arsene Wenger will select:

Goalkeeper: David Ospina was restored between the sticks against Chelsea last weekend after Wojciech Szczesny played in the FA Cup semi-final and the Colombian is expected to keep his place tomorrow.

Defence: Kieran Gibbs could get a recall at left-back. He looked rusty against Reading two weeks ago and if he’s going to play in the FA Cup final later this month, Wenger is going to need to give him some game-time.

Otherwise, I’d expect the boss to stick with Per Mertesacker alongside Laurent Koscielny in the middle of defence. Mathieu Debuchy is a doubt with a hamstring injury so Hector Bellerin should keep his place at right-back.

Midfield: Mikel Arteta and Alex Oxlade-Chamberlain are back in full training but neither will make the trip to the KC Stadium tomorrow. Jack Wilshere is back in contention but is expected to remain on the bench.

The big decision for Arsene is who partners Francis Coquelin in the heart of midfield. Santi Cazorla is the No.1 choice right now and I think that will continue tomorrow night.

Attack: With Cazorla in the middle, Aaron Ramsey won’t be starting in his preferred position yet again. The Welshman has been forced to play out wide recently but I don’t think it’s worked too well as he keeps drifting in to the middle.

Therefore, we may see Danny Welbeck start out wide and join Mesut Ozil and Alexis Sanchez in supporting Olivier Giroud in attack. 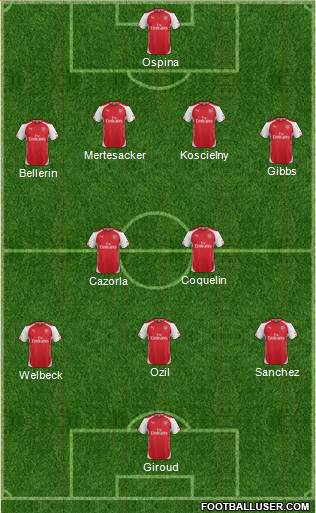