Arsenal will be looking to cement third spot in the table when they take on Manchester United at Old Trafford on Sunday. Here is our predicted team.

Arsenal will be looking to cement third spot in the table when they take on Manchester United at Old Trafford on Sunday afternoon. Here is the side Gooner Mac thinks Arsene Wenger will select:

Goalkeeper: David Ospina is firmly in favour under Wenger now so the Colombian is expected to keep his place on Sunday afternoon ahead of Wojciech Szczesny.

Defence: The boss is unlikely to tinker too much with a back four that has started in each of our last five matches. Kieran Gibbs is pushing for a recall at left-back but I think we’ll see Nacho Monreal keep his place.

Per Mertesacker will start alongside Laurent Koscielny in the middle of defence. Mathieu Debuchy is back in training after recovering from a hamstring injury but he won’t be in contention just yet so Hector Bellerin should keep his place at right-back.

Midfield: Aaron Ramsey is a doubt with a knock that he aggravated against Swansea on Monday night. If he’s passed fit, then I think Arsene will stick with his usual side that he’s been playing in recent weeks but if the Welshman isn’t fit enough to start, then we could see Jack Wilshere make his first start in over five months.

Wilshere has impressed from the bench in recent games, despite being asked to play on the right-wing, and he could be deployed in that role on Sunday as Theo Walcott is clearly out-of-favour under Wenger right now.

Alex Oxlade-Chamberlain has suffered a fresh hamstring injury in training so he’s definitely out of the game while Mikel Arteta is still not match fit.

Attack: Danny Welbeck has been ruled out after failing to recover from a knee injury so Olivier Giroud is set to lead the line once again, despite a disappointing game against Swansea.

Mesut Ozil will certainly keep his place in attack along with Chilean sensation Alexis Sanchez. 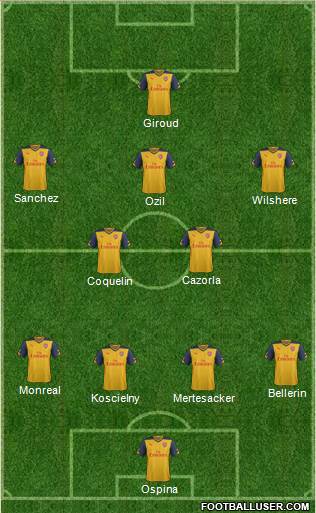