As the opening of the summer transfer window approaches, managers are working hard identifying targets and lining-up potential deals so we’ll bring you all the news and gossip. Today, John Terry has his say on Petr Cech’s proposed move to Arsenal…. 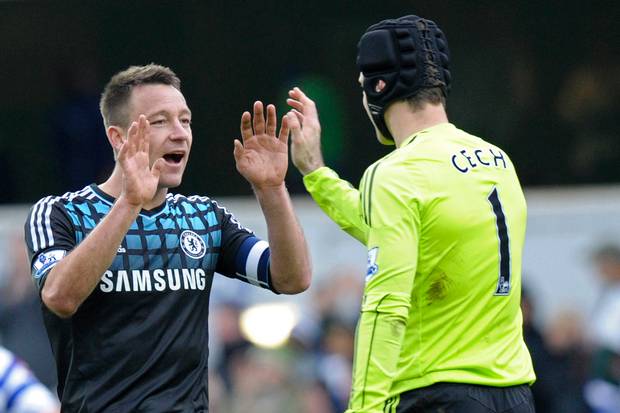 Chelsea captain John Terry has backed Petr Cech to be a huge success at Arsenal and claims he would save the Gunners between 12 and 15 points a season, according to talkSPORT.

Cech is expected to leave Chelsea this summer after 11 years at Stamford Bridge having lost his place in Jose Mourinho’s starting eleven to Thibaut Courtois last season.

The Czech international has been hotly tipped to make a move across London to Arsenal with Sky Sports News reporting over the weekend that the Gunners have agreed personal terms with the experienced goalkeeper.

The proposed deal is not over the line just yet and while Terry insists he wants Cech to remain at the Bridge, he admits the stopper would be an excellent signing for Arsenal who would save them between 12 and 15 points a season.

“There’s talk of Arsenal signing Petr Cech and, if they do get him, he will strengthen them for sure. He will save them 12 or 15 points a season,”

“Petr was an unbelievable professional last year. When you get left out of the team it can be hard to accept but, when he came in [to the side], he was exceptional.

“He deserves a lot of credit for that. We understand he wants to play first-team football but nobody wants to see him leave the club.

“He’s going to be sorely missed and will improve any side he goes to.”

Arsenal finished 12 points behind champions Chelsea last season so if Cech does complete a move to the Emirates and Terry’s prediction is correct, then it’s safe to say Arsene Wenger’s men should be right in the title mix next year.

The Gunners have lacked a reliable pair of hands in goal since the days of Jens Lehmann and I think Cech would be a game-changer for the North London side as they’d finally have a top class keeper the team can rely on.

If the 33-year-old was to join Arsenal, then you’d expect one of David Ospina or Wojciech Szczesny to leave the club. Ospina has been linked with a move to Fenerbache with the Metro claiming he’s already agreed personal terms with the Turkish side, so perhaps Wenger is ready to give Szczesny another chance and hope that Cech’s arrival will bring the best out of the young Pole.

We’ll have to wait and see how things develop over the coming days but it does appear inevitable that Cech will end up joining Arsenal this summer, and I’m sure Blues fans will be praying they don’t end up regretting it in 12 months time.