Manchester United have announced the signing of Morgan Schneiderlin on a four-year deal from Southampton. See photos of the midfielder in his new kit.

With the summer transfer window finally open for business, managers are working hard trying to strengthen their squads ahead of next season so we’ll bring you all the news and gossip. Today, Man Utd complete the signing of Morgan Schneiderlin…. 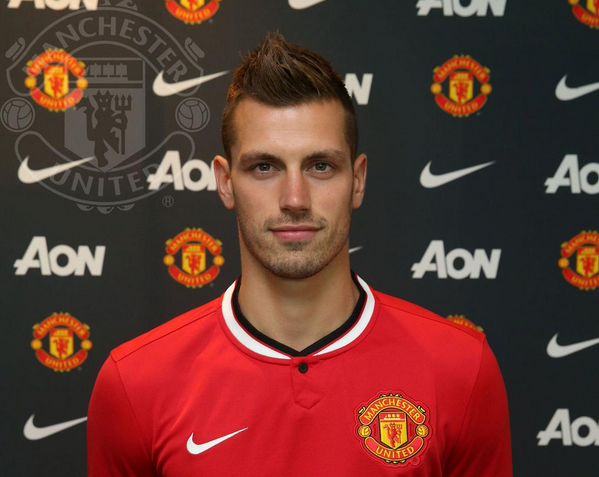 Manchester United have announced the signing of Morgan Schneiderlin on a four-year deal from Southampton with the option to extend his stay for a further season.

Schneiderlin’s future has been up in the air ever since he was quoted in the Daily Mail earlier in the summer as saying he wanted to leave Southampton to join a top four club competing in the Champions League.

United soon emerged as favourites for his signature and news broke late on Sunday night that the midfielder was at their Carrington training base undergoing a medical after a deal had been agreed with the Saints [via the Mirror].

It appears those formalities have now been concluded as United announced on ManUtd.com a short time ago that Schneiderlin has joined the club on a four-year deal with the option to extend by a further year.

Having completed his move, the midfielder told the clubs website:

“I am delighted to be a Manchester United player. Once I learned that United were interested in signing me, it was a very easy decision to make. I have enjoyed seven very happy years with Southampton and it’s a club that will always be in my heart. But the chance to be part of this squad to help this great club be successful was too good to miss.

“I’m excited to be starting that journey on our trip to the USA. I know what Manchester United means to fans all over the world and I’m looking forward to experiencing that.”

Neither club has confirmed the official transfer fee but the Mirror claim United will pay Southampton £24m, which I think is a fair deal in today’s market for a player of Schneiderlin’s quality.

The French international has been in outstanding form for Southampton over the past two or three years with his consistent displays making him one of the best midfielders in the Premier League and I think he’s going to be a major success at Old Trafford.

Louis van Gaal needed to bring in a player to help ease the load on Michael Carrick and Schneiderlin is the perfect man for the job. His arrival comes just minutes after United also announced they have signed Bastian Schweinsteiger from Bayern Munich [via ManUtd.com] so suddenly van Gaal has a wealth of options in the middle of the park.

Schweinsteiger and Schneiderlin will now link-up with their new team mates and fly out to the US this afternoon as United begin their pre-season tour in Seattle.