Arsenal inflicted a psychological blow to Chelsea ahead of the new season after a 1-0 victory in the Community Shield. Here are talking points from the game

Arsenal inflicted a psychological blow to Chelsea ahead of the new Premier League season after emerging 1-0 victors in the Community Shield on Sunday. Here, Gunner333 offers his talking points from the game….. 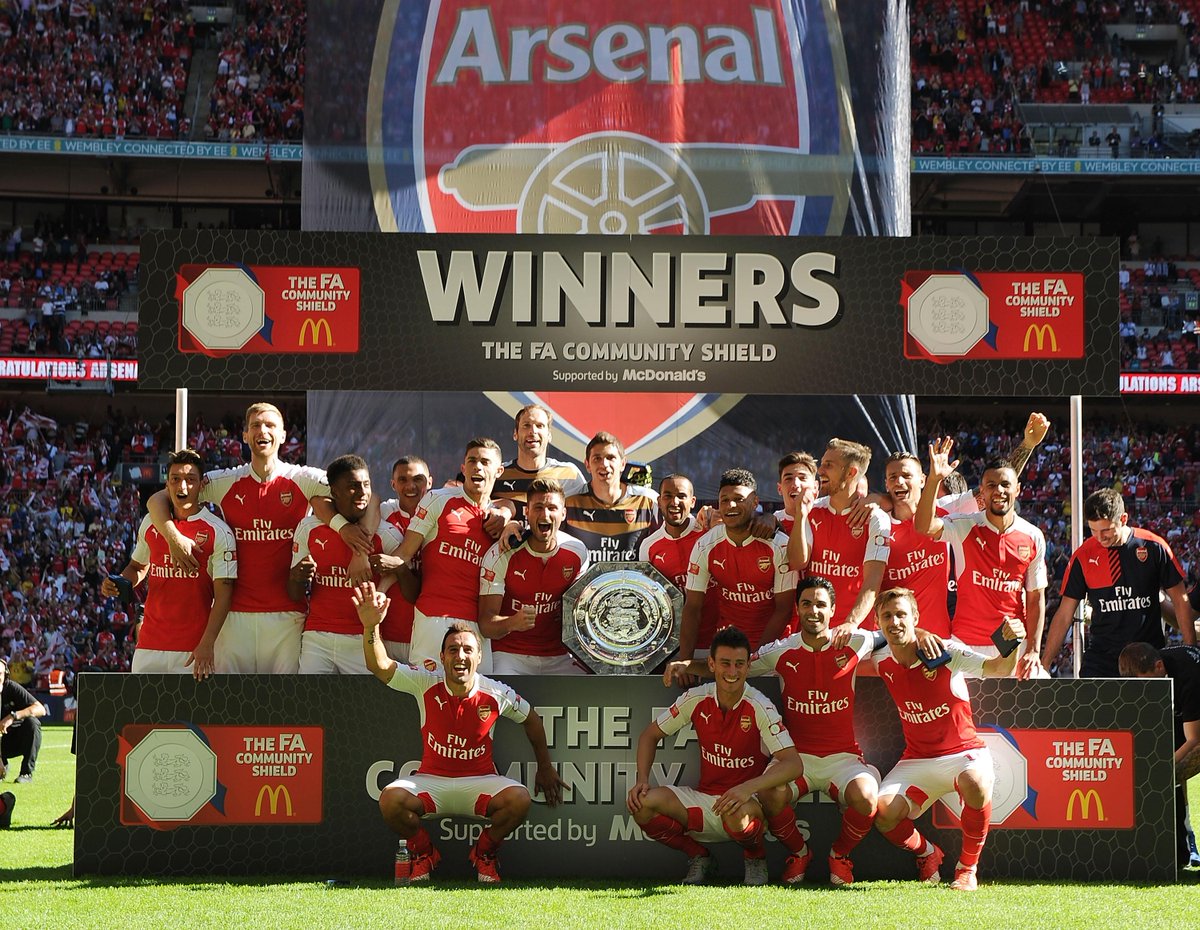 The Gunners returned to the New Wembley for the first time since their 4-0 demolition of Aston Villa in May’s FA Cup final, with the opportunity to confirm a trio of pre-season cup successes. Despite the lack of activity in the transfer market this Summer, there has been a heightened sense of optimism in the Arsenal camp of late. Victory over a big side like Chelsea would stand them in good stead ahead of next week’s opening set of league fixtures and hand the Gunners the edge in the psychological battle.

Petr Cech’s surreal switch to North-London has given a reality boost, as the 33-year-old shot stopper was the most eye-catching name in both line-ups, starting against the side he played at for for 11 years. With Alexis Sanchez on an extended break and Olivier Giroud benched, Theo Walcott yet again lead the Arsenal line.

While Wenger’s tenure at the London club was heading into its twentieth year, the Frenchman had yet to beat opposing boss José Mourinho, so the encounter between the two would be handed some added spice.

A half-hearted penalty appeal from the Blues was the most alarming moment in a rather tentative start to the game, with Cesc Fabregas appealing for a potential body-check by Per Mertesacker on the edge of the area, but the referee waved away the pleading Spaniard and it would in-fact be the FA Cup holders who would draw first blood.

Azpilicueta failed in guiding Alex-Oxlade Chamberlain away from goal, as the Englishman’s touch opened a sight of goal and the former-Saint rifled one into the top right-hand corner to put Arsenal one up. Chelsea were far from their best and Diego Costa’s absence was all too apparent when midfielder Ramires failed to capitalise on Loic Remy’s ball into the box, firing his header well over the bar.

Mourinho’s men had failed to hit the target in the first period and looked a shadow of the the powerhouse side that brushed aside the rest of the league last term.

A glorious chance for an equaliser presented itself to Eden Hazard in the second half, but the Belgian skied it; the bold figure of Petr Cech potentially playing on his mind. Oscar then unleashed cheer from the Arsenal faithful, as the Brazilian’s free-kick warranted a show-reel save from the former-Chelsea keeper. The clock ticked on and it was Kurt Zouma who next tested Arsenal’s new man between the sticks, but it was routine from Cech who gathered the defender’s looping header.

Both Cazorla and Gibbs could’ve wrapped the game up in similar situations, but a resolute Arsenal side had looked comfortable throughout the afternoon and defended their Community Shield crown.

Here I shall now discuss the talking points from the match…

Let me start by getting the negative aspects out of the way. The victory was an impressive one, albeit against a slightly below-par Chelsea outfit, and it was an ideal way to seal a pre-season steeped in success. If we are to be genuine competitors with the South-London side this campaign though, there a just a few minor issues that should be addressed.

My first qualm may have been influenced by the all-round flow of the game, but one individual was the main culprit. I am talking about Mesut Özil’s lethargic and sluggish all-round game. Now, while it can be excused as it’s still so early in the season, this is something that needs to be looked at before next week.

On numerous occasions in this game, the German found himself with acres of space to exploit and seldom put the foot down to really accelerate and maximise the chance. He is not a slow player. It was merely a case of failing to make the most of the opportunity.

And so, on to Theo Walcott. Quite the diminutive figure all game, Theo saw little of the ball and this was largely down to how Chelsea play. The Blues didn’t play as high a line as expected and sat back to load their defensive box for large periods in the game, meaning there was little if no space for Theo to run into on the overlap. This is where he needs to adapt and find a plan B in his game – he needs to hold up the ball. Unlike his French counterpart Olivier Giroud however, Theo lacks the strength and physicality to do this, which ultimately forced Wenger into the tactical switch mid-way through the second half.

My final concern arises with the gaffer himself. The team generally may have looked positive and played on the front-foot but Wenger’s substitution of Mikel Arteta for Oxlade-Chamberlain still baffles me. Yes, it’s always important to defend a lead and it’s something I’ve talked about us doing more regularly in the past, but Arsenal defend in their own way- the second Wenger actually puts the focus on that area of the game, mistakes occur. With Walcott already taken off, Oxlade-Chamberlain’s departure left the side with limited pace on the counter attack and, although Gibbs eventually filled that void, I find it a strange one as to why Wenger didn’t look to deploy Arteta in place of Ramsey or Cazorla through the middle.

Now my cynical attitude to the match has been cleared up, it’s time to look at the positives and there were a lot of them. Firstly, Oxlade-Chamberlain, the man of the match, deserves a special mention.

Showing great composure with a sublime finish, he looked the most likely to break down the Chelsea door and his work-rate was through the roof. Something I especially like about him is his continuing eagerness to get forward, even if he’s recently fluffed a chance, he always comes back for more. Able to drift out wide and add another body in the centre for the possession game, Alex’s versatility was vital yesterday and no-one in the Arsenal squad matches his style.

Cech, despite having little to do, emitted a confident vibe across the back-line and I believe his presence alone lifted Arsenal spirits. Laurent Koscielny especially looked inspired and has mastered the nitty-gritty side of his game, as he broke down Chelsea attacks with last ditch tackles in the area on numerous occasions.

While the defence made sound work of nullifying the likes of Hazard and Remy, they were very alert in clearing danger quickly and, unlike Arsenal sides of the past, hoofed the ball long when Chelsea were on attack, rather than trying to play out with a shorter pass, which would more than likely be intercepted.

Bellerin made marking Hazard look like a formality and it is the Spaniard’s supreme pace to track back and get forward which renders him our first choice at right-back. Monreal was just as sharp on the other side and read the game very well.

Generally though, there were no outstanding performers and it was a genuine team effort. It was always going to be tough when the champions roll into town, but I believe Arsenal have voiced there intentions with the victory. Jose Mourinho believed his side played the better and it was a case of Arsenal defending their way to victory. I see no problem with this. Chelsea were well-renowned for their ‘park-the-bus’ attitude last season which eventually lead to silverware and, with Steve Bould’s prominent influence as assistant coach, the Arsenal of old looks set to return when required.

This doesn’t mean there will be any less of an attacking, dynamic style from the side, but it may mean the Gunners look to chalk out the odd 1-0 win in tough games, rather than trying to completely out-play their opponents and yesterday was an example of that plan in action – and it worked perfectly.

Thanks for reading and feel free to comment below….