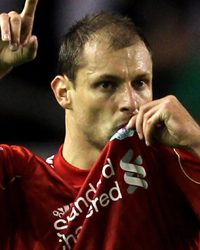 Liverpool won Group K of the Europa League with a 1-1 away draw with Steau Bucharest last night. Roy Hodgson opted to give youth its chance again in this competition, they did enough to garner a commendable point in Romania.
Milan Jovanovic scored a very impressive headed goal on 19 mins following a lovely cross by the enigmatic Ryan Babel.

Steau attacked for much of he game thereafter , as they had to at home in front of their own fans and desperately needed the points as they try to qualify for the knockout stages of this tournament. The equaliser arrived in the second half when Pepe Reina, Captain for the night, allowed a tame header slip between his legs and go across the line to make it 1-1 on the night.
So, all well and good, we top the group and qualify for the knockout stages of the Europa League with young players getting chnces to shine for the team.

However, I have one gripe with Roy Hodgson and that is his reluctance to use Milan Jovanovic more often in the first team. The guy is a good player, he scored 69 goals in 153 games for Standard Liege, was named Belgian player of the year in 2008 and won the Golden boot in Belguim in 2009 with 16 goals in 29 games, so the Serbian knows how to find the back of the net and I would dearly love to see Roy Hodgson start him upfront alonside Fernando Torres more often.

He has the pedigree, the ability and the desire to be a success at Anfield. Give him a chance Roy.

Submitted by Friends oF Liverpool