Man Utd will be looking for all three points when they take on Liverpool at Old Trafford on Saturday evening. Here is the side I think van Gaal will pick

Manchester United will be looking to get one over their North West rivals when they entertain Liverpool at Old Trafford on Saturday evening. Here is the side I think Louis van Gaal will pick:

Goalkeeper: The big question is whether David de Gea will return to the starting eleven following the collapse of his move to Real Madrid on deadline day. Sergio Romero wasn’t convincing while deputising in goal and De Gea got a solid 90 minutes under his belt for Spain in midweek. There have been rumours in the newspapers that De Gea is set to start following clear-the-air talks with van Gaal so I think we’ll see him back between the sticks.

Defence: van Gaal has played a settled back four in each of their opening four Premier League games so I don’t think we’ll see too many changes at the back tomorrow.  That means Matteo Darmian at right back, Luke Shaw on the left and Daley Blind continuing alongside Chris Smalling in the middle.

Midfield: Michael Carrick is unlikely to be fit after picking up a knock while away with England so Bastian Schweinsteiger is likely to start alongside Morgan Schneiderlin in midfield. Ander Herrera could also start in the advanced midfield role to give United an extra body in the middle of the park.

Attack: United fans will be eager to see big-money signing Anthony Martial for the first time but I highly doubt the Frenchman will start, so Wayne Rooney is set to lead the line up front with Memphis Depay and Juan Mata deployed alongside him in attack. 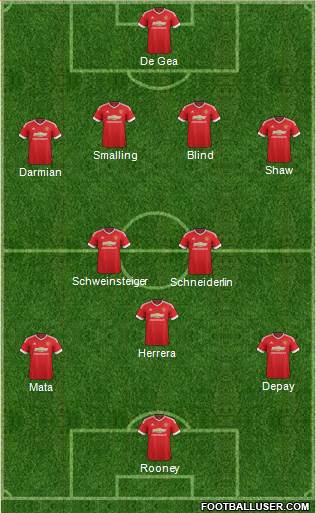