Liverpool take on FC Sion in the Europa League tonight. Here’s a preview with team news, likely line-up, betting and predicted score for the game.

Liverpool will look to secure their first win in this year’s Europa League when they entertain FC Sion at Anfield this evening.

The Reds came away with what could be a very useful point following a 1-1 draw at Bordeaux two weeks ago but they’ll be looking for all three on home soil tonight.

Brendan Rodgers’ men warmed up for the game with a 3-2 victory over Aston Villa on Saturday to lift them up to ninth in the Premier League table following a disappointing start to the campaign.

The Europa League is often looked upon as a burden by those clubs pushing for the top four but Liverpool would have a decent chance of going all the way and lifting the trophy if they took it seriously.

But they’ll first have to get out of Group B and they shouldn’t be taking FC Sion too lightly as the Swiss outfit sit top after beating Rubin Kazan 2-1 on matchday one.

Rodgers will rotate his squad ahead of Sunday’s Merseyside derby against Everton with several of his key men expected to be given a breather.

Daniel Sturridge won’t be involved and Martin Skrtel, James Milner and Lucas Leiva are among those who are also expected to be rested.

Youngster Jordan Rossiter is likely to start in midfield and should be joined by Joe Allen while Joe Gomez and Kolo Toure could start at the back.

Divock Origi is expected to start up front with Adam Lallana playing in the No.10 role while Jordon Ibe should start on the right wing. 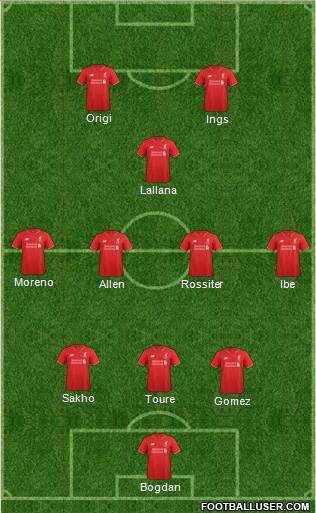 Liverpool 3-0 FC Sion: The Reds are yet to hit top form so far this season but FC Sion are also struggling domestically and I can see Liverpool putting a few goals past them tonight.

Liverpool are the 6/10 favourites to win the game but Football-Talk can get new customers enhanced odds of 4/1 on a home win. My prediction of 3-0 is available at odds of 10/1, while I also like the look of Danyn Ings to open the scoring at odds of 7/2. If we combine those two bets in a score-cast, then we get very tempting odds of 22/1.