Tottenham will look to extend their unbeaten run when they take on Liverpool at White Hart Lane on Saturday. Here is the side we think Pochettino will select.

Tottenham will look to extend their unbeaten Premier League run when they take on Liverpool at White Hart Lane on Saturday. Here is the side we think Mauricio Pochettino will select for the game:

Goalkeeper: There are unlikely to be too many changes from the side that drew 2-2 with Swansea before the international break and Hugo Lloris is certain to keep his place between the sticks.

Defence: Danny Rose is back in contention after recovering from a hand injury and Pochettino could bring the England international in for Ben Davies at left-back.

Kyle Walker should keep his place at right back while Jan Vertonghen and Toby Alderweireld will continue their partnership in the middle of defence.

Midfield: Spurs have problems in midfield as Ryan Mason and Nabil Bentaleb have once again been ruled out with knee and ankle injuries while Eric Dier serves a one-game suspension after already collecting five bookings this season.

It leaves Pochettino with limited options so Mousa Dembele may be deployed in a deeper role alongside impressive youngster Deli Alli.

Attack: Son Heung-Min has also been ruled out through injury so Nacer Chadli is likely to keep his place on the left wing while Christian Eriksen and Erik Lamela are expected to once again support striker Harry Kane in attack. 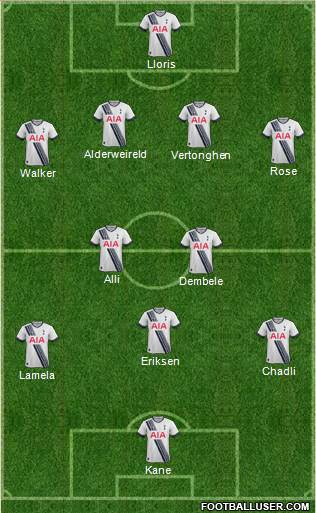