Man Utd take on Middlesbrough in the League Cup tonight. Here’s a preview with team news, likely line-up, betting tips and predicted score for the game.

Manchester United will look to book their place in the quarter finals of the Capital One Cup when they entertain Middlesbrough at Old Trafford tonight.

Louis van Gaal’s men were held to a disappointing 0-0 draw by Manchester City on Sunday afternoon with the result leaving the Red Devils fourth in the Premier League standings.

United have lost just once in their last eight games in all competitions but they could face a tricky test at home this evening as Middlesbrough head to Old Trafford in decent form themselves.

Aitor Karanka’s side moved up to fourth in the Championship table on Saturday with a comeback victory over Wolves and they have proven to be a dangerous outfit on their day so United will have to be at their best if they want to progress to the last eight.

van Gaal is expected to make some changes to his starting eleven with the likes of David De Gea, Chris Smalling, Bastian Schweinsteiger, Ander Herrera and Wayne Rooney all set to be rested.

Jesse Lingard is likely to start in attack while Sergio Romero could get a rare run out between the sticks. Antonio Valencia has been ruled out so Matteo Darmian should start at right-back.

Paddy McNair and Luke Shaw remains on the sidelines but the likes of Daley Blind, Michael Carrick, Marouane Fellaini and Memphis Depay should gets starts.

As for Boro, Stewart Downing is expected to start despite carrying a minor rib injury while Bruno Zurculini could make his debut.

Adam Forshaw, Albert Adomah and Christian Stuani are all missing through injury. 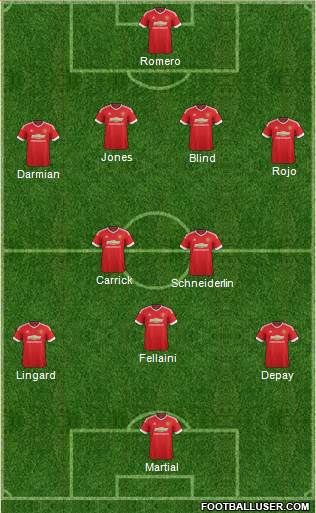 Man Utd 2-1 Middlesbrough: United were solid against City but it was a dull game in truth and I expect a more entertaining affair tonight. Boro will cause some problems but I can see the hosts edging it to secure their place in the next round.

United are the 4/9 favourites to win the game but Football-Talk can get you enhanced odds of 4/1 on a home victory this evening – just click here to take advantage. My predicted score of 2-1 is on offer at odds of 8/1 while I also like the look of Memphis Depay opening the score at 11/2. If we combine those two bets in a score-cast, then we get very tempting odds of 28/1.