Arsenal will look to keep their Champions League hopes alive when they take on Bayern Munich on Wednesday. Here’s our predicted team for the game

Arsenal will look to keep their Champions League hopes alive when they take on Bayern Munich on Wednesday night. Here is the side Gooner Mac thinks Arsene Wenger will select for the game:

Goalkeeper: Petr Cech is a certainty to keep his place in goal and you’d expect him to play a key role if we’re to get anything from the game.

Defence: Arsene could decide to make a change at the back with Gabriel coming in for Per Mertesacker if the boss feels the Brazilian defender’s pace would be useful against the Bayern attack.

Otherwise we should see our first team regulars of Laurent Koscielny, Hector Bellerin and Nacho Monreal making up the back four.

Midfield: Wenger has very little movement for change in midfield due to a lengthy injury list that includes the likes of Aaron Ramsey, Jack Wilshere, Tomas Rosicky and Mikel Arteta so Santi Cazorla will continue alongside Francis Coquelin.

Attack: The options in attack are severely limited too as Alex Oxlade-Chamberlain and Theo Walcott have joined Danny Welbeck on the sidelines so I don’t think we’ll see any change to the side that beat Swansea at the weekend.

Joel Campbell put in an impressive shift at the Liberty stadium on Saturday with his hard-working display capped off with a fine late goal to seal the 3-0 win so I think the Costa Rican will get the nod to start alongside Alexis Sanchez and Mesut Ozil in attack once again.

Olivier Giroud was also among the goals again at the weekend and we need another big performance from the big man up front if we’re to get anything against Bayern tomorrow night. 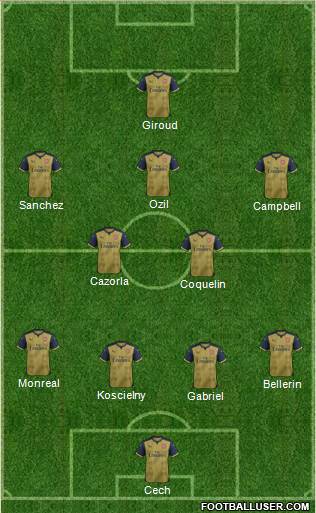