Liverpool will look to secure qualification to the knockout stages of the Europa League when they take on Bordeaux at Anfield. Here is our predicted team

Liverpool will look to secure qualification to the knockout stages of the Europa League when they take on Bordeaux at Anfield on Thursday night. Here is the side I think the Jurgen Klopp will pick:

Defence: Klopp is going to be forced into at least one change at the back as Martin Skrtel has been ruled out through illness. Mamadou Sakho is also still sidelines so it looks like Kolo Toure will partner Dejan Lovren in the heart of defence. Alberto Moreno and Nathaniel Clyne should keep their places in the full-back slots.

Midfield: This is usually a game Lucas Leiva would be afforded a rest but with the Brazilian suspended for Sunday’s Premier League clash with Swansea City, he should start tomorrow night.

That could mean Emre Can gets a breather with Joe Allen coming in to the midfield while James Milner and Adam Lallana should once again start on the wings. Jordan Henderson remains out through injury.

Attack: Philippe Coutinho is set to miss out with a minor hamstring injury that he suffered against Manchester City so we could see Christian Benteke come in to the side up front with Roberto Firmino dropping to a deeper role.

Daniel Sturridge is likely to be named on the bench after returning to full training last week and he’ll hope to get some minutes under his belt in the second half. 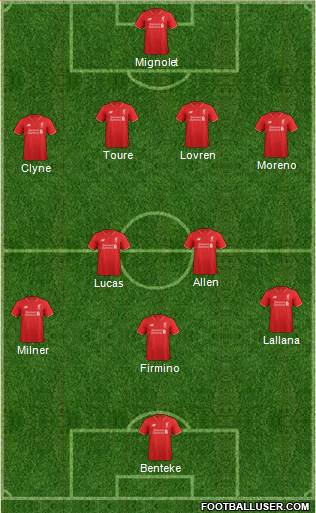