Guus Hiddink will take charge of his first game in charge as new Chelsea boss when they face Watford at Stamford Bridge. Here is our predicted line-up:

Guus Hiddink will take charge of his first game in charge as interim boss when Chelsea face Watford at Stamford Bridge on Boxing Day. Here is our predicted line-up:

Goalkeeper: Thibaut Courtois is back after a lengthy injury absence and is almost certain to keep his place in goal.

Defence: Hiddink could make one change to the back four that beat Sunderland 3-1 on Saturday as the Dutchman may want to freshen things up as we head into the hectic festive period.

Gary Cahill could be recalled alongside John Terry in the heart of defence with Kurt Zouma the man most likely to drop out. Cesar Azpilicueta and Branislav Ivanovic are expected to keep their places in the back four.

Midfield: Cesc Fabregas was back in the starting eleven last time out and should keep his place alongside Nemnaja Matic. If Hiddink wants more steel in midfield, he could bring in Ramires but I think he’ll stick with Fabregas and Matic.

Attack: Eden Hazard missed the win over Sunderland with a hip injury but he was back in training today and could be back in contention on Saturday. If the Belgian international is passed fit, then Pedro could make way.

Willian should keep his place in attack while Oscar could once again start with Diego Costa leading the attack up front. 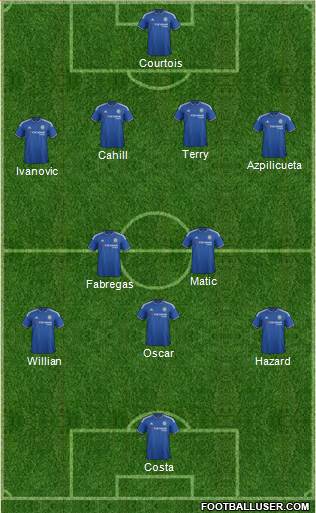