Arsenal will be looking to bounce back when they take on Bournemouth at the Emirates on Monday night. Here is the side we think Wenger will select for the game:

Arsenal will be looking to bounce back following Saturday night’s defeat to Southampton when they take on Bournemouth at the Emirates on Monday night. Here is the side Gooner Mac thinks Arsene Wenger will select for the game:

Goalkeeper: He may have conceded four goals last night, but Petr Cech is a certainty to keep his place in goal.

Defence: Our defence was an utter shambles against the Saints and Per Mertesacker in particular had a game to forget. Therefore, I think the boss might make one or two changes at the back with Gabriel likely to come in alongside Laurent Koscielny.

Mathieu Debuchy isn’t even making the squad these days and it looks like he’ll be off in January so I expect Hector Bellerin to continue at right-back but Kieran Gibbs could be given a rare start with Nacho Monreal handed a rest.

Midfield: Arsene has few options in the middle of the park as Santi Cazorla, Francis Coquelin, Jack Wilshere and Mikel Arteta all remain on the sidelines. The club have been training Calum Chambers in the midfield role in recent weeks and he was brought on to replace Mathieu Flamini during the final 15 minutes against Southampton.

With this game coming so soon after the loss at St Mary’s, I think we might see Chambers handed a start alongside Aaron Ramsey to give Flamini a breather. It will be a risk but we don’t have too many alternatives unfortunately.

Attack: We offered very little going forward last night but once again due to injuries to the likes of Alexis Sanchez, Tomas Rosicky and Danny Welbeck, we don’t have that many options to bring in against Bournemouth.

I do think we’ll see Alex Oxlade-Chamberlain given a start in place of Joel Campbell but otherwise it’ll be the same front-line that faced Southampton. Let’s just hope we get back to our creative best tomorrow night. 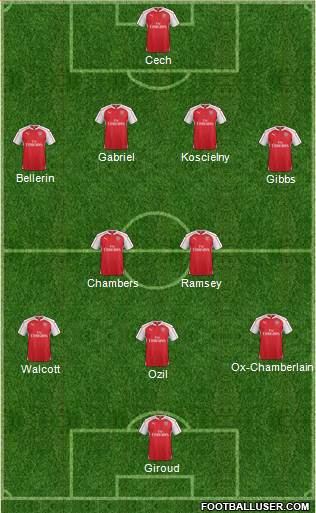