Manchester United will look to book their place in the fourth round of the FA Cup when they entertain Sheffield United at Old Trafford on Saturday evening.

The Red Devils come in to the game off the back of a hard fought 2-1 win over Swansea City last weekend which saw them climb up to fifth in the Premier League table and to within just three points of the top four.

That victory ended a run of eight games without a win for United in all competitions and it certainly lifted the pressure on Louis van Gaal’s shoulders so the Dutchman will be hoping to build some momentum with another win tomorrow.

However, they face a Sheffield United side that have a decent pedigree in the domestic cups and the League One club are more than capable of pulling off an upset, so United should know better than to take them too lightly.

United will be without Phil Jones after the defender picked up a foot injury during the win over Swansea so Daley Blind could start in the middle of defence alongside Chris Smalling.

Ashley Young is also out as van Gaal says the versatile midfielder is in the ‘red zone’ so Guillermo Varela could start at right-back with Matteo Darmian coming in on the left.

Michael Carrick should also start in midfield while Anthony Martial may be given a rest with Memphis Depay coming in to the attack.

Jesse Lingard is available again after recovering from a hamstring injury but Adnan Januzaj, who was recalled from his loan with Borussia Dortmund this week, isn’t fit enough to play just yet. 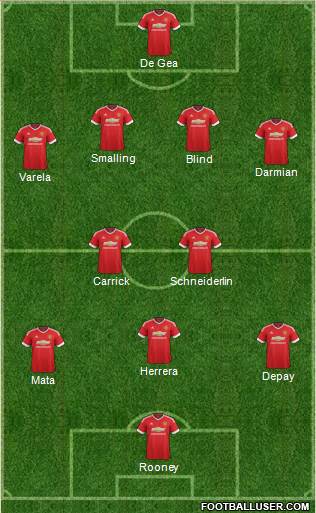 Man Utd 2-1 Sheffield United: United have been in poor form of late and Sheffield United are the type of side who reserve some of their best form for the cup competitions so I’m expecting a tough game for the Red Devils. However, they should have too much quality on home soil for the League One side in the end.

Man Utd are the 1/3 favourites with the bookmakers but Football-Talk can get you enhanced odds of 3/1 on a United victory – just click here to take advantage. My prediction of 2-1 is on offer at 8/1 and I also like the look of Juan Mata opening the scoring at odds of 5/1. If you combined those two bets in a score-cast then we get very tempting odds of 25/1.