Manchester United take on Derby County in the FA Cup at the IPro Stadium on Saturday afternoon. Here is the side I think van Gaal will pick:

Manchester United will look to book their place in the fifth round of the FA Cup when they take on Derby County at the IPro Stadium on Saturday afternoon. Here is the side I think van Gaal will pick:

Defence: Matteo Darmian has joined the ever-growing list of full-backs on the sidelines after being forced off against Southampton last weekend. Ashley Young has also been ruled out for several weeks with a groin injury so with Antonio Valencia still on the sidelines, van Gaal may have no choice but to start youngster Guillermo Varela at right-back.

The United boss also has problems on the left side of defence with Luke Shaw and Marcos Rojo also out with long-term injuries so Cameron Borthwick-Jackson is expected to keep his place in the team.

There has been no update on the fitness of Phil Jones so we’ll have to assume the defender will remain out with a foot problem. Therefore, Daley Blind should continue alongside Chris Smalling at the back.

Midfield: Bastian Schweinsteiger is also set to miss out once again due to a knee injury so Morgan Schneiderlin will continue in the middle of the park. Michael Carrick is back in contention but van Gaal says he’s not ready to play the full ninety minutes so Marouane Fellaini could keep his place in midfield.

Attack: We may see one change in attack with Juan Mata coming back in for Jesse Lingard but otherwise it should be the same front-line that faced Southampton. van Gaal can’t afford any more slip-ups so I think we’ll see Wayne Rooney, Anthony Martial and Ander Herrera all retain their places. 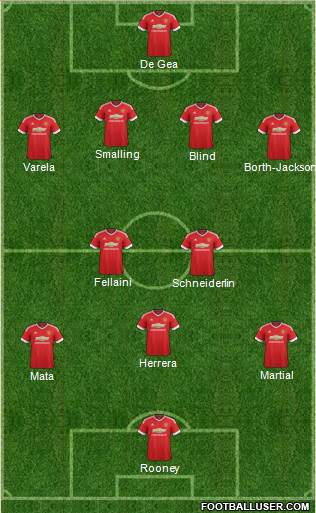