Chelsea will look to book their place in the fifth round of the FA Cup when they take on MK Dons on Sunday. Here is the side we think Guus Hiddink will select

Chelsea will look to book their place in the fifth round of the FA Cup when they take on MK Dons on Sunday afternoon. Here is the side we think Guus Hiddink will select for the game:

Goalkeeper: Thibaut Courtois is set to be given a rest with No.2 Asmir Begovic handed the gloves.

Defence: Hiddink is also likely to rest skipper John Terry with Gary Cahill given a recall to the defence. Otherwise I think the Dutchman will stick with the same back four that kept a clean sheet against Arsenal last weekend meaning Branislav Ivanovic, Kurt Zouma and Cesar Azpilicueta will keep their places.

Midfield: John Obi Mikel appears to have edged himself ahead of Nemanja Matic in Hiddink’s pecking order recently so the Nigerian could be rested ahead of Wednesday’s Premier League clash at Watford.

Unless Hiddink wants to given youngster Ruben Loftus-Cheek a rare start, Matic should keep his place in midfield alongside Cesc Fabregas.

Attack: Eden Hazard made his return from a groin injury as a second half substitute at the Emirates last Sunday so the Belgian should be recalled to the starting eleven this weekend.

Pedro Rodriguez could also get a recall for Oscar while Willian should keep his place in attack. Diego Costa was forced off at Arsenal with a knee problem but the injury isn’t serious and he’s fit to start up front on Sunday. 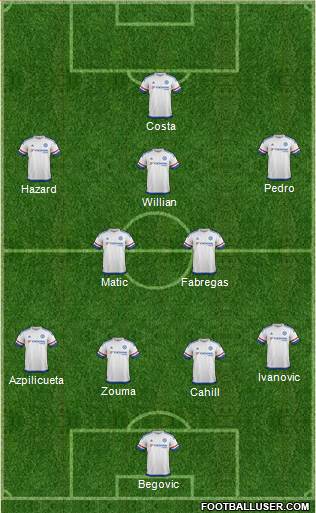