Arsenal take on Southampton at the Emirates Stadium on Tuesday night. Here is the side Gooner Mac thinks Arsene Wenger will select for the game:

Arsenal will look to get their title charge back on track when they take on Southampton at the Emirates on Tuesday night. Here is the side Gooner Mac thinks Arsene Wenger will select for the game:

Goalkeeper: Petr Cech was rested for Saturday’s FA Cup game so he should be restored between the sticks tomorrow with David Ospina dropping to the bench.

Defence: Per Mertesacker is back from his one game ban and is expected to be recalled with Gabriel missing out while Laurent Koscielny should be passed fit to play despite picking up a minor knock against Burnley at the weekend.

Hector Bellerin is set to come back in at right-back which means Calum Chambers is likely to drop to the bench despite scoring a beauty at the weekend while Nacho Monreal will get a recall in place of Kieran Gibbs at left-back.

Midfield: Mohamed Elneny made a solid start to his life at Arsenal on Saturday but I think we’ll see Aaron Ramsey recalled after being rested from the entire squad last time out.

Francis Coquelin returned to the starting eleven following a two month injury absence at the weekend and he came through the game unscathed so I think we’ll see the Frenchman retain his place ahead of Mathieu Flamini tomorrow night.

Attack: Alexis Sanchez also made his first start in two months against Burnley and showed no signs of being rusty after scoring the winner so I’d be surprised if he didn’t keep his place against Southampton.

Mesut Ozil is certain to get a recall but it will be interesting to see who Arsene Wenger goes with on the right wing. Joel Campbell has performed very well in recent weeks but I have a feeling Wenger will go with Theo Walcott against his former club after resting the England ace at the weekend.

Danny Welbeck is back in full training but this game comes too soon so Olivier Giroud is likely to start up front. 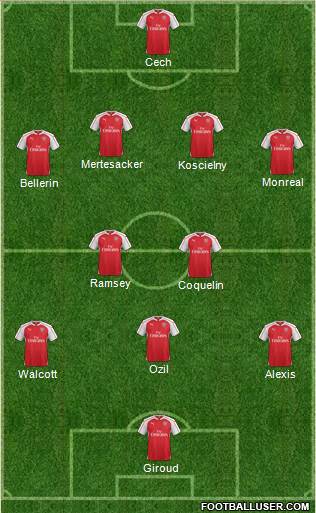