Liverpool will look to climb up the Premier League table when they take on Aston Villa at Villa Park on Sunday. Here is the side I think Jurgen Klopp will pick.

Liverpool will look to climb up the Premier League table when they take on Aston Villa at Villa Park on Sunday afternoon. Here is the side I think Jurgen Klopp will pick.

Goalkeeper: Number one goalkeeper Simon Mignolet is certain to start in goal once again this weekend.

Defence: Klopp is expected to make wholesale changes from the side that started during Tuesday night’s FA Cup defeat at West Ham. Nathaniel Clyne and Alberto Moreno should come back in to the full-back slots despite Brad Smith and Jon Flanagan impressing in midweek.

Dejan Lovren and Martin Skrtel have been ruled out of this game so Kolo Toure could partner Mamadou Sakho at the back – although Steven Caulker is pushing for a recall after overcoming a minor back injury.

Midfield: Jordan Henderson, Emre Can and James Milner are all set to return to the starting eleven after being rested against the Hammers. This could see Lucas Leiva left on the bench after he filled-in at centre-back in midweek while Joe Allen has been ruled out after suffering a muscle injury last week.

Attack: Liverpool have been handed a welcome triple injury boost in attack with Daniel Sturridge, Philippe Coutinho and Divock Origi all making their comebacks at Upton Park.

Coutinho came through 55 minutes unscathed so should be passed fit to start this one but I think Klopp will be more cautious with Sturridge and keep him on the bench after he played over an hour in midweek.

Therefore, Roberto Firmino should lead the line up front with Adam Lallana coming in to support in attack. 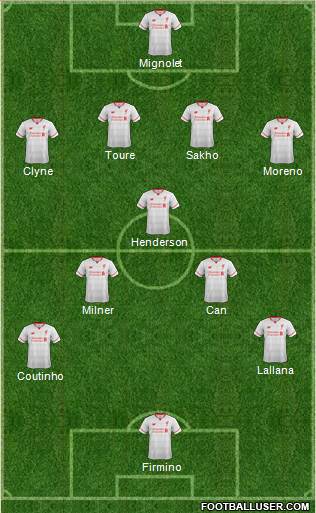