Chelsea take on Paris Saint-Germain at Stamford Bridge on Wednesday night. Here is the side we think Guus Hiddink will select for the game:

Chelsea will look to book their place in the last 8 of the Champions League when they take on PSG at Stamford Bridge on Wednesday night. Here is the side we think Guus Hiddink will select for the game:

Goalkeeper: No need for any change in goal so Thibaut Courtois is expected to keep his place between the sticks with Asmir Begovic once again among the substitutes.

Defence: John Terry has been ruled out once again after failing to recover form a hamstring injury that’s plagued him in recent weeks so with Kurt Zouma out for the season with a knee injury, Branislav Ivanovic is set to continue alongside Gary Cahill in the middle of defence.

Cesar Azpilicueta will therefore continue at right-back while Baba Rahman could keep his place at left-back with Kenedy only just returning to full training following a minor injury problem.

Midfield: I think Hiddink might show PSG some respect and play two holding midfielders in from of the back four so Nemanja Matic should continue alongside John Obi Mikel in the middle of the park tomorrow night.

Attack: Cesc Fabregas is set for a recall after being rested for the 1-1 draw with Stoke at the weekend and if Hiddink does go with Matic-Mikel in midfield, then the Spaniard should be deployed in a slightly more advanced role.

Eden Hazard and Willian will play on the flanks while Diego Costa is set for a recall after taking part in full training today having missed the Stoke game at the weekend with a minor groin complaint.

Bertrand Traore will feel unfortunate to miss out after scoring a fine goal against Stoke but the youngster should keep his place in the squad and be available from the bench if needed along with the likes of Alexandre Pato and Loic Remy. 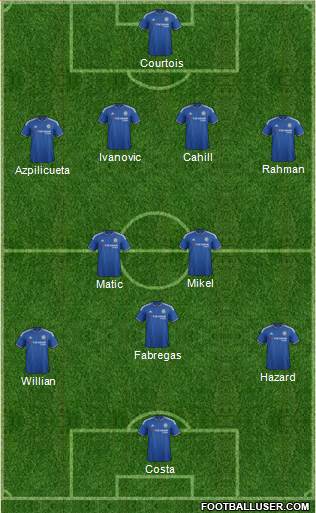