Arsenal will be looking to reclaim third place when they take on West Brom at the Emirates on Thursday night. Here is our predicted team for the game:

Arsenal will be looking to reclaim third place when they take on West Brom at the Emirates on Thursday night. Here is the side Gooner Mac thinks Arsene Wenger will select for the game:

Goalkeeper: Petr Cech was partially at fault for the Crystal Palace equaliser on Sunday but I don’t think we’ll see Wenger drop his number one again, so I expect the Czech international to start.

Defence: I do, however, think we might see a couple of changes in defence with Per Mertesacker coming back in for Gabriel alongside Laurent Koscielny at the back. Gabriel has looked suspect in recent games and I was actually surprised he kept his place against Palace.

Hector Bellerin should retain his place but I think would could see Kieran Gibbs given a game at left-back with Nacho Monreal rested.

Midfield: Wenger might also be tempted to hand Aaron Ramsey a recall as we looked lacking in creativity in the middle of the park on Sunday and the boss may feel we don’t need two defensive minded players at home to West Brom.

Mohamed Elneny is the man most likely to make way if Ramsey does start as the Egyptian international has played a lot of football lately having only broken into the team in February. Jack Wilshere is now fit after recovering from his fractured leg but Arsene has suggested he won’t return until the weekend.

Attack: We were a little wasteful in front of goal at the weekend but I don’t think we’ll see any changes to the front four tomorrow night. Alex Iwobi doesn’t derseve to lose his place after one below par display while there’s little chance of Mesut Ozil or Alexis Sanchez being dropped.

The only change that could happen is Olivier Giroud coming in for Danny Welbeck up top but I think Wenger will want Welbeck’s pace in attack as opposed to the physical Giroud. 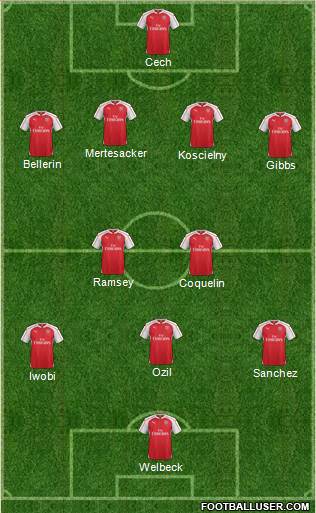