Liverpool will be looking to bring home a positive result from their Europa League semi final first leg against Villarreal. Here is our predicted line-up

Liverpool will be looking to bring home a positive result from their Europa League semi final first leg against Villarreal on Thursday night. Here is the side I think Jurgen Klopp will pick for the game.

Goalkeeper: Simon Mignolet dropped another clanger during the 2-2 draw with Newcastle United on Saturday but the Belgian is expected to keep his place tomorrow night.

Defence: Klopp is set to recall Nathaniel Clyne at right-back while Alberto Moreno will start on the left but the big decision is who to start alongside Dejan Lovren at centre-back. Mamadou Sakho isn’t available for selection while investigations continue in to his failed drug test so Kolo Toure is favourite to keep his place after starting against Newcastle. Martin Skrtel or Lucas Leiva are other options if Klopp wants to change things.

Midfield: With Emre Can and Jordan Henderson out through injury, Joe Allen is favourite to start in midfield alongside James Milner. Leiva could be an option for Klopp but I think the Welsh Pirlo will get the nod.

Attack: With Divock Origi out with ankle ligament damage, Daniel Sturridge is set to lead the line up front with Roberto Firmino and Adam Lallana keeping their places in attack.

Philippe Coutinho is certain to get a recall with Kevin Stewart dropping out while Christian Benteke will be an option from the bench after travelling to Spain having returned to full training following a knee injury. 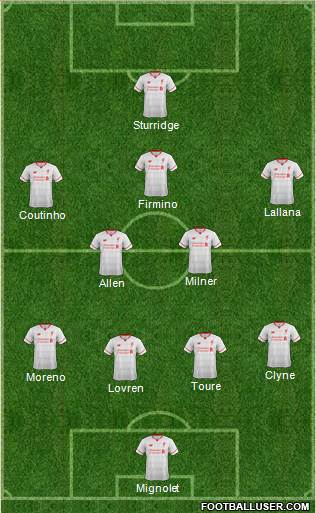