Arsenal boss Arsene Wenger has confirmed he’s in the market for an experienced centre-back after losing a star man for several months with a knee injury. 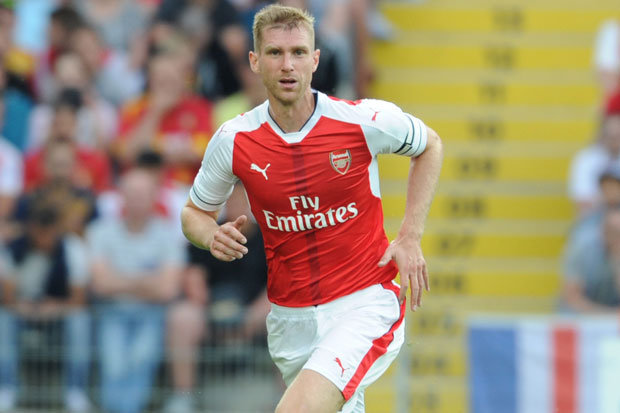 Arsenal boss Arsene Wenger has confirmed he’s in the market for an experienced centre-back after Per Mertesacker was ruled out for several months with a knee injury.

News broke on Monday night that Mertesacker was facing an extended spell on the sidelines after suffering a knee injury during our 1-1 pre-season friendly draw with RC Lens last Friday.

The German defender was left back in north London as the rest of the squad flew-out to the United States for our pre-season tour and Wenger has now given an update on the defenders situation at a press conference late last night.

The boss has confirmed the bad news that Mertesacker has been ruled out for several months after undergoing surgery on his knee in Germany. Arsene didn’t give a specific timeframe on his recovery but the Telegraph claim the club expect Mertesacker to be out for at least five months meaning he won’t be back until well in to 2017.

The good news is that Wenger has admitted we’re now short of options in defence and indicated he’s looking to bring in an experienced centre-back before the transfer window closes.

We have bad news on Per Mertesacker. He played in Lens on Friday night, he finished the game and had a little pain on his knee. We found out the next day that it was much more serious than expected. He had surgery yesterday in Germany. It all went well. I know you will ask me for how long he will be out. I don’t know that, it’s [some] months, but I don’t know [exactly] how long he will be out for.

We have to look for an option to get a bit more experience. We will see some of our young centre backs on Thursday as well. With Per being out, we are a bit short on the experience front and we are looking to bring somebody in.

It’s obviously a huge blow to lose a player of Mertesacker’s quality and experience but thankfully Wenger has acknowledged we need to bring in an experienced replacement, so let’s hope the boss manages to get something done quickly.

The Liverpool game is just two-and-a-half weeks away and we’re already facing a selection crisis at the back with Laurent Koscielny set to miss out due to his late arrival for pre-season following his exploits at Euro 2016.

Gabriel should be fully recovered from his bout of tonsillitis to face the Merseysiders but it means Wenger will have to choose from Calum Chambers, Rob Holding or possibly Nacho Monreal to partner the Brazilian unless a new player comes in.