Arsenal will look to build on the win over Watford when they take on Southampton at the Emirates on Saturday. Here is the side we think Wenger will select

Arsenal will look to build on the win over Watford when they take on Southampton at the Emirates on Saturday afternoon. Here is the side Gooner Mac thinks Arsene Wenger will select for the game:

Defence: The big question is whether Shkodran Mustafi will be handed his debut following his move from Valencia just before deadline day and I think we’ll see Wenger start the German international alongside Laurent Koscielny at the back.

Rob Holding has done an excellent job but the youngster is set to make way for our big-money signing while Per Mertesacker and Gabriel remain out with long-term injuries. Nacho Monreal and Hector Bellerin should retain their positions in the full-back roles.

Midfield: Granit Xhaka put in another solid performance against Watford before the international break so I’d expect the Swiss international to keep his place and I see no reason why Santi Cazorla won’t once again start alongside him. Mohamed Elneny and Francis Coquelin will be pushing for starts but it’s difficult to leave Cazorla out.

Aaron Ramsey isn’t expected to be risked after only just recovering from a hamstring injury while Jack Wilshere is obviously no longer available after joining Bournemouth on loan.

Attack: Olivier Giroud is pushing to make his first start of the new season after regaining full match fitness and I expect he’ll lead the line up front meaning Lucas Perez may have to make do with a place on the bench.

Giroud’s return means Alexis Sanchez can move back to the wing while Theo Walcott should keep his place in attack after another decent run out against Watford last time out. Mesut Ozil will obviously once again start in the No.10 role.

BACK ARSENAL TO BEAT SOUTHAMPTON AT CRAZY ODDS OF 5/1 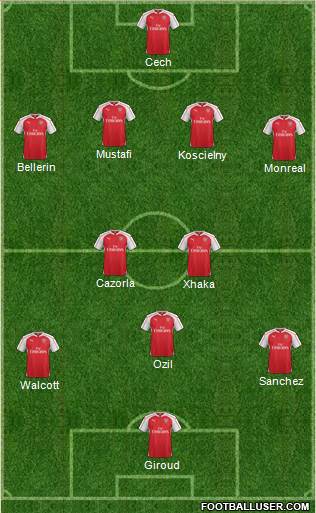