Manchester United take on Liverpool at Anfield on Monday night. Here is the side I think Jose Mourinho will pick for the game:

Manchester United will be looking to close the gap on the top four when they take on Liverpool at Anfield on Monday night. Here is the side I think Jose Mourinho will pick for the game:

Goalkeeper: David de Gea is certain to start in goal tomorrow night with Sergio Romero on the bench.

Defence: Mourinho is expected to recall Luke Shaw to the starting eleven after the full-back finally recovered from an injury that’s kept him out for the last five games. Daley Blind could be the man to miss out if Chris Smalling keeps his place alongside Eric Bailly at the back.

Antonio Valencia should be passed fit to start at right-back as the Monday night kick off has given him plenty of time to recover from his exploits in South America last week.

Midfield: Ander Herrera seems to have played his way in to Mourinho’s starting eleven so the Spaniard could keep his place in midfield ahead of the likes of Marouane Fellaini, Michael Carrick and Morgan Schneiderlin.

Paul Pogba is almost certain to keep his place in the middle of the park and the French international will be looking to put in a big performance in his first north-west derby against Liverpool.

Attack: Wayne Rooney was axed for the win over Stoke before the international break and also lost his starting berth for England, and the skipper is expected to once again be named on the bench tomorrow night.

Zlatan Ibrahimovic will once again lead the line up front while Marcus Rashford and Juan Mata should retain their places in attack. Jesse Lingard may also be in line for a recall with Anthony Martial the man most likely to make way. 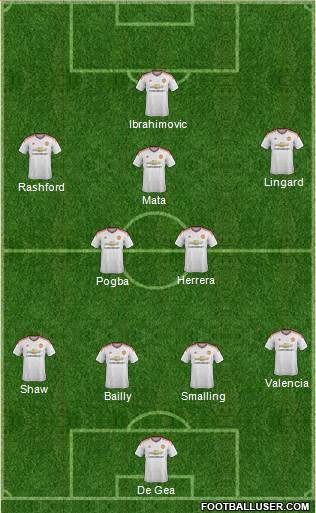