Liverpool will be looking to book their place in the semi finals of the EFL Cup when they take on Leeds Utd on Tuesday. Here is our predicted line-up

Liverpool  will be looking to book their place in the semi finals of the EFL Cup when they take on Leeds United at Anfield on Tuesday night. Here is the side I think Jurgen Klopp will select for the game:

Goalkeeper: Klopp has already confirmed that Simon Mignolet will come in for the game with No.1 Loris Karius dropping out.

Defence: As in previous rounds of the competition, the Reds boss is once again set to make wholesale changes to his starting eleven with Ragnar Klavan and Alberto Moreno expected to come in to the back four with Dejan Lovren and James Milner rested.

Nathaniel Clyne should also get a breather with Trent Alexander-Arnold starting at right-back but we might see Joel Matip retain his place at the back if Klopp decides to play Lucas Leiva in midfield.

Midfield: Adam Lallana has been ruled out as he continues to nurse a groin injury that’s kept him out in recent games so Klopp is likely to try and protect the rest of his starting central midfielders meaning Jordan Henderson, Emre Can and Gini Wijnaldum all getting a rest.

Leiva could therefore start in the holding role with youngsters Kevin Stewart and Marko Grujic coming in to start in front of the experienced Brazilian.

Attack: Liverpool will have to make do without Philippe Coutinho for at least five weeks after scans confirmed he suffered ankle ligament damage against Sunderland on Saturday afternoon.

Roberto Firmino is a doubt with a calf problem that he sustained during the closing minutes at Anfield at the weekend so he’s unlikely to be risked while Daniel Sturridge is still unable to train after picking up his own calf complaint last week.

With three key men nursing injuries, Klopp’s attacking options are a little stretched so Sadio Mane may have to play on the right with Ovi Ejaria expected to get another run-out after impressing against Tottenham in the previous round.

Divock Origi is almost certain to start up front after coming on to replace Coutinho against Sunderland and the Belgian international managed to open the scoring with a cross-come-shot in the 75th minute.

Danny Ings would have been in contention but he’s been ruled out for the season with a knee injury while Sheyi Ojo is still nursing a back complaint. 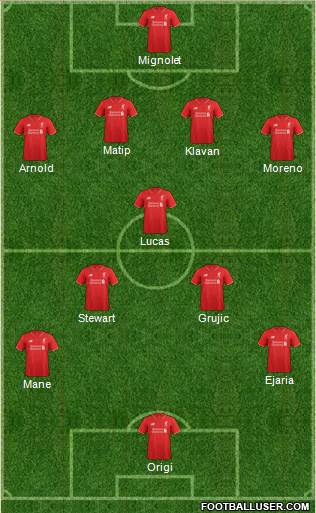