Man Utd will be looking to book their place in the semi finals of the EFL Cup when they take on West Ham at Old Trafford. Here is our predicted team.

Manchester United will be looking to book their place in the semi finals of the EFL Cup when they take on West Ham at Old Trafford on Wednesday night just days after the two sides drew 1-1 in the league.

Goalkeeper: David de Gea was rested for the Europa League win over Feyenoord last week and Mourinho may be tempted to give his No.1 another breather – particularly following the devastating news that one of his former Atletico Madrid team mates was among those killed in a plane crash in Colombia – so Sergio Romero could start in goal.

Defence: Eric Bailly is back in training after recovering from a knee injury but the Ivorian isn’t going to be ready to return just yet so he’ll remain unavailable along with Chris Smalling, who continues to nurse a toe injury.

Phil Jones could once again keep his place after another impressive display against West Ham in the Premier League on Sunday afternoon but we could see Daley Blind come in for Marcos Rojo at the back.

Antonio Valencia may once again start at right-back but Luke Shaw could come in for Matteo Darmian on the left side of defence after being left out at the weekend.

Midfield: Michael Carrick had started in United’s previous two games prior to the West Ham match but wasn’t involved on Sunday so the 35-year-old is expected to be recalled tomorrow night and line-up against his former side.

With Paul Pogba and Marouane Fellaini both suspended after picking up their fifth bookings of the season last time out, Ander Herrera is set to keep his place in the middle of the park.

Attack: Wayne Rooney will have felt unlucky to lose his place at the weekend after starring against Feyenoord last Thursday so I expect the skipper to come back in to the side tomorrow night.

Henrikh Mkhitaryan was also dropped despite his impressive outing in the Europa League so the Armenian international is expected to get a recall with Marcus Rashford missing out after a poor display against the Hammers on Sunday.

Juan Mata is favourite to keep his place in attack after Mourinho criticised Anthony Martial having left him out of the squad at the weekend while Zlatan Ibrahimovic is expected to lead the line up front. 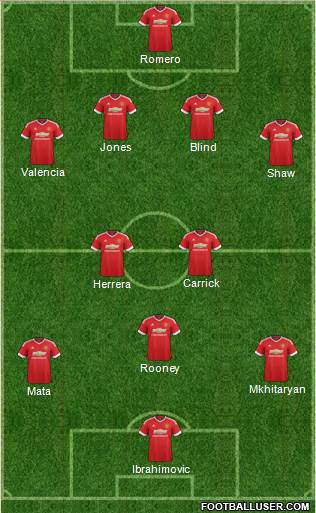