Liverpool take on Bournemouth at the Vitality Stadium on Sunday afternoon. Here is the side I think Jurgen Klopp will select for the game:

Liverpool will be looking to keep the pressure on at the top of the Premier League table when they take on Bournemouth at the Vitality Stadium on Sunday afternoon. Here is the side I think Jurgen Klopp will select for the game:

Goalkeeper: Simon Mignolet started in the midweek EFL Cup win over Leeds United but No.1 Loris Karius is expected to be recalled on Sunday.

Defence: Klopp is set to make a number of changes to the side that started on Tuesday night with Nathaniel Clyne coming back in for youngster Trent Alexander-Arnold at right-back and James Milner replacing Alberto Moreno at left-back.

Dejan Lovren and Joel Matip are also expected to resume their fine partnership in the middle of defence with Lucas Leiva and Ragnar Klavan dropping out.

Midfield: There will also be changes in midfield with skipper Jordan Henderson coming in and youngsters Kevin Stewart and Ovie Ejaria set to miss out after enjoying a run-out in midweek.

Emre Can should keep his place in midfield while Gini Wijnaldum could move back in to the middle of the park after playing in a wider role against Leeds. Record-breaking teenager Ben Woodburn will be hoping to be on the bench after scoring in midweek to become the clubs youngest ever goal-scorer.

Attack: Adam Lallana has returned to full training after recovering from a groin injury that’s kept him on the sidelines for the past month so the England international could be deployed out on the left side of attack to fill the void left by Philippe Coutinho.

The Brazilian international has been ruled out for at least five weeks after suffering ankle ligament damage during the win over Sunderland last week.

Roberto Firmino is back in contention after returning to training on Thursday having missed the win over Leeds with a minor calf injury that he picked up last weekend while Sadio Mane should once again start on the right.

Divock Origi is pushing to keep his place after scoring twice in his last two games but I think we’ll see Firmino restored up front with Origi used as an option from the bench with Daniel Sturridge ruled out with a calf injury. 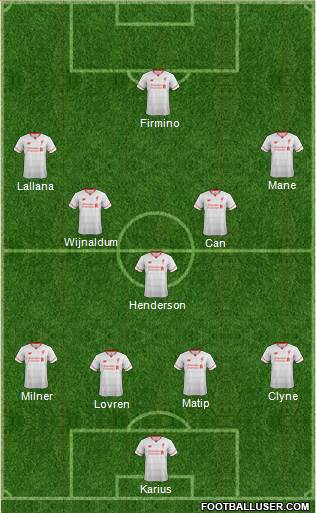