Three Man Utd players have been named in the WhoScored? Premier League Team of the Week following their performances during Sunday’s 1-0 win over Tottenham.

Manchester United trio Ander Herrera, Phil Jones and David De Gea have all been named in the WhoScored? Premier League Team of the Week following their performances during Sunday’s 1-0 win over Tottenham.

Herrera has become a key part of Jose Mourinho’s starting eleven this season and proved his worth once again with an all-action display against Spurs which saw him provide a superb assist for Henrikh Mkhitaryan’s winner midway through the first half.

The Spaniard’s performance has earned him a rating of 8.61 which is enough to see him named in the WhoScored? Team of the Week alongside Hull City’s Jake Livermore.

Jones has revitalised his Old Trafford career after finally putting his injury problems behind him and the defender was excellent again at the weekend with his performance earning him a rating of 8.42 and a place in the TOTW.

De Gea has been one of United’s most consistent performers for three years and the goalkeeper was at his best again to keep Tottenham at bay on Sunday to earn a place alongside team mates Herrera and Jones.

Manchester City’s Alexandre Kolarov made the cut after scoring a lovely goal during their 4-2 defeat to Leicester while Jamie Vardy is unsurprisingly in the side with his hat-trick performance earning him a perfect 10/10 rating.

Fernando Llorente joins Vardy in the team after he continued his fine recent form with a brace for Swansea during their 3-0 win over Sunderland while Wilfried Zaha also makes the cut after putting in an excellent display for Crystal Palace during their draw with Hull City on Saturday.

Here is the latest WhoScored? Team of the Week: 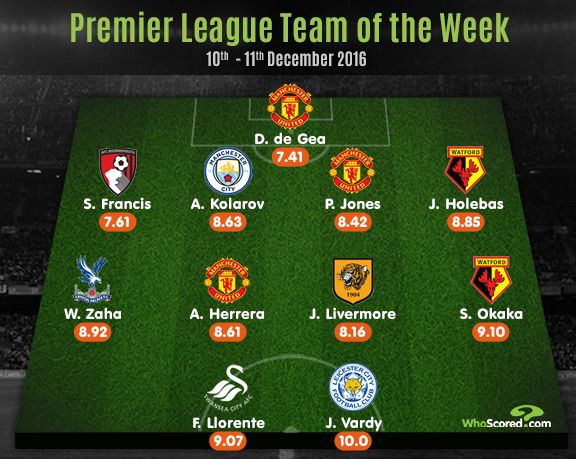