Manchester United will be looking to take control of the tie when they entertain Hull City in their EFL Cup semi-final first leg at Old Trafford on Tuesday night.

Goalkeeper: The Portuguese coach has confirmed he’ll freshen things up by recalling his big guns to the starting eleven after resting them for Saturday’s FA Cup win over Reading. That means we should see Sergio Romero drop out with David De Gea returning between the sticks.

Defence: There should be changes at the back too with Antonio Valencia a confirmed starter at right back while Phil Jones and Matteo Darmian should also come back in to the defence.

Marcos Rojo is expected to miss out after picking up a knock against Reading so with Eric Bailly off preparing for the Africa Cup of Nations, it means Chris Smalling should keep his place at the back tomorrow.

Midfield: Mourinho has also confirmed that Ander Herrera will return in midfield with Marouane Fellaini set to drop to the bench while Michael Carrick could keep his place after another impressive display at the weekend.

Attack: Wayne Rooney broke United’s all-time goal-scoring record with the opener against Reading but the skipper could find himself back on the bench tomorrow night with Paul Pogba set to return to the fold.

Mourinho has also revealed that Zlatan Ibrahimovic will resume his place up front after being rested on Saturday meaning Marcus Rashford is likely to find himself back on the bench despite scoring twice last time out.

Henrikh Mkhitaryan is pushing for a recall in attack while Jesse Lingard could also come back in to freshen things up with Juan Mata and Anthony Martial dropping out. 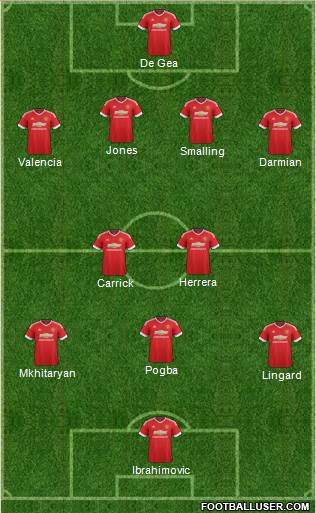