Can we win against Wolves? 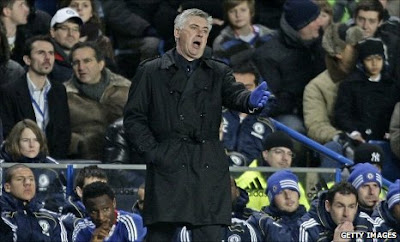 If it was three months back, many of you would have thought I’m a retarded fellow to ask such a question. It’s unfortunate that we are at a point where winning games against the Bottom Table Teams too are being a tough task for Chelsea. Very unfortunate. The defense is shaky and sloppy, Midfield is normally out numbered by the opposing team and the attackers aren’t scoring enough. Altogether the system isn’t working as it was 3 months before.

I’m really impressed with Manchester City’s enthusiasm. Now they have almost signed Edin Dzeko and I’m sure they are gonna come even stronger after January. I’m not going to repeat again the watch words ‘WE HAVE TO SIGN PLAYERS’. Assuming the signings have been done, one more point I’m always worried about Ancelotti is, he never has a Plan ‘B’. Had you watched Manchester United’s matches regularly you would have noticed that they have a special quality, that is bouncing back. I still remember that game, I think the season before last, where United bounced back from a 2-0 half time defeat against Spurs and the full time score was 5-2 for United. This is one noble quality we lack. The reason United bounces back very strongly is, Fergie always has a plan ‘B’. Tactical consistency is good but that doesn’t mean we shouldn’t have plans ‘B’ & ‘C’ or even at times a ‘D’. One thing many pundits have questioned is Ancelotti’s substitutions, even the fans go puzzled at times seeing the substitutions Ancelotti makes. What will poor Carlo do when he doesn’t have the right players in the bench? well, perhaps he could simply stay away from making crazy changes!

What kind of plan ‘B’ can Ancelotti try? well, of course he could try the famous ‘Ancelotti Diamond’ (4-4-2 Diamond Formation) when 4-3-3 isn’t working. Ancelotti started last season with the Diamond and ended the season with 4-3-3. The ‘Diamond’ produced some good wins and some bad defeats, especially after defeats against Wigan and Villa last season Ancelotti seriously considered changing the Diamond and shifted to Chelsea’s favourite 4-3-3 and of course it produced some marvelous results last season and at the start of this season. But now the ‘4-3-3’ seems not working. Why? 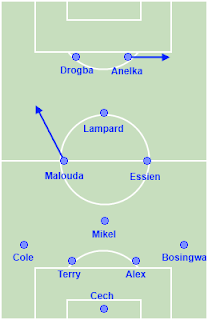 In my humble opinion, Diamond is a very strict formation, the players have to stick to their positions properly for the diamond to produce success. In other words in the Diamond formation players lack creative freedom. Especially for players like Lampard, Malouda and Drogba ‘Diamond’ was so bitter. We saw Malouda struggling to play in the Diamond, which he publicly expressed the displeasure in the media and Lampard always stayed back in the games, lacked chances to go forward. So for a team with such ‘creative’ players the ‘Diamond’ seems so strict, tight and tough. In contrast the 4-3-3 gives players lots of freedom, we saw that at the latter stages of last season and at the start of this season. BUT for a player to use his maximum creativity and play freely he needs ‘CONFIDENCE’ – the team needs ‘CONFIDENCE’. It’s not only about having the freedom to play with creativity but also having the confidence to implement good creativity. When the team lost morale due to on & off field failures, the 4-3-3 started to struggle. To score like in ‘playstation football’ the team needs to have extra confidence and morale boost and also the opposition should be afraid to play against this team only in such scenario a ‘playstaion football’ can be produced. When Chelsea started to struggle, the confidence of the players dropped and the oppositions utilized this golden opportunity to ruin Chelsea’s game. I cannot exactly say whether the exact turning point was Man City game or Wilkin’s sack, but definitely within those 1-2 months Chelsea started to struggle. What Ancelotti could have done is, changed 4-3-3 temporarily to a strict ‘Diamond’ which he mastered and which is his favourite but Ancelotti didn’t do that he simply kept on trying, trying and trying producing only 2, 1-0 wins and one 2-1 win in 11 games. These days Ancelotti’s pre-match and post-match views have become kind of cliches. I do not believe any talking will help boosting the morale of the team but only wins will.

More than wins, more and more goals are the only way to increase the team morale and confidence. One ‘playstation football’ performance in the next much will suffice to bring back the confidence. Yes we need a defender and a striker, apart from that we need confidence injected into the whole team and only wins and goals will give that. Without such confidence 4-3-3 or any other ‘free and creative’ formation would not work, so what Ancelotti could do is instead of giving the freedom, when the players are lacking confidence to utilize the freedom, make them play a strict and tight game. Make them play stick to their positions, he could try his ‘Diamond’ against Wolves. I no crystal ball gazer to say that Diamond will assure victory but with the current run 4-3-3 clearly seems not working and with only 3 in the midfield it is always a risk when the players are not confident with their games. I’m not insisting on playing the Diamond, Ancelotti can even try the most basic 4-4-2 but what I say is instead of giving more freedom to the players and letting them run around like mad dogs around the pitch (like Anelka running all over the pitch doing nothing good against Villa) force them to play a strict game by imposing positional duties, which might produce better results.

This is what I think, If we are not changing anything, even winning against Ipswich in the weekend or winning against Copenhagen would be a tough task. Ancelotti definitely has a million time better football mind than me, hope he comes out of frustration and try to reverse this bad run.