Liverpool take on Manchester City at the Etihad Stadium on Saturday lunchtime. Here is the side I think Jurgen Klopp will select for the game:

Goalkeeper: Simon Mignolet was rested for the 4-0 win over Arsenal before the international break but the Belgian international is fully expected to be recalled this weekend with Loris Karius dropping back to the bench.

Defence: Trent Alexander-Arnold was named among the substitutes last time out as he was feeling the effects of a dead leg so the youngster could get a recall at right-back with Joe Gomez the man to make way.

Otherwise, I think Klopp will stick with the same defence that shut out Arsenal at Anfield meaning Alberto Moreno could keep his place at left-back with Dejan Lovren once again starting alongside Joel Matip.

Nathaniel Clyne is still nursing a hamstring injury that’s set to keep him out for several weeks so he won’t be involved for a while.

Midfield: Alex Oxlade-Chamberlain is pushing to make his debut after joining Liverpool from Arsenal last week but the midfielder may have to bide his time as Klopp could stick with Emre Can and Gini Wijnaldum alongside Jordan Henderson in midfield.

Adam Lallana remains on the sidelines with a thigh injury while James Milner will have to make-do with a place on the bench against his former club.

Attack: All eyes will be on Philippe Coutinho to see whether he returns to the side after failing to force a move to Barcelona during the summer transfer window.

The playmaker made a miraculous recovery from an apparent back injury to play for Brazil during the international break so he is match-fit and he took part in full training today, however, Klopp has no reason to rush Coutinho back in to the starting eleven.

Sadio Mane, Mohamed Salah and Roberto Firmino have all been excellent so far this season so I think we’ll see Klopp stick with those three in attack meaning Coutinho may have to make do with a place on the bench for now. 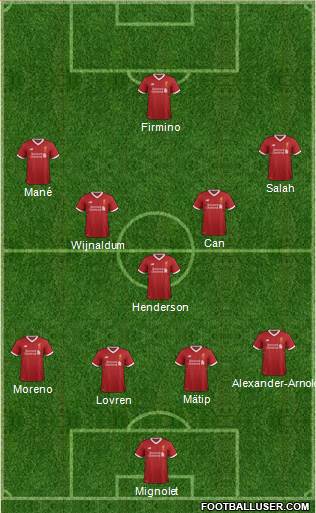