The transfer window is now closed but clubs are already thinking ahead to January and next summer so we’ll bring you all the latest gossip from around the globe. Today, Man Utd are eyeing Mesut Ozil…

Mesut Ozil is ready to quit Arsenal when his contract expires next summer and wants to link-up with Jose Mourinho at Manchester United, according to reports in Germany via The Sun.

Ozil is in the final year of his current contract at the Emirates and his long-term future has been in doubt for several months as contract extension talks continue to drag-on.

Arsene Wenger admitted yesterday that negotiations over a new deal have slowed in recent weeks as the two parties struggle to agree terms leading to speculation Ozil could be on the move at the end of the season.

The Sun suggest that Ozil has decided to leave Arsenal on a free transfer next summer despite the North Londoners offering the playmaker a lucrative new contract worth £8.1m-per-season.

And the newspaper is citing a report from SportBild that claims the 28-year-old wants to be reunited with Mourinho at Manchester United at the end of the current campaign.

Ozil played under the Portuguese coach for three years during their time together at Real Madrid before the attackers move to Arsenal in 2013 and Mourinho has always spoken highly of the player.

It remains to be seen whether United chiefs will be interested in taking Ozil to Old Trafford but there were fleeting reports during the summer that Mourinho was keeping his eye on the playmaker’s situation. 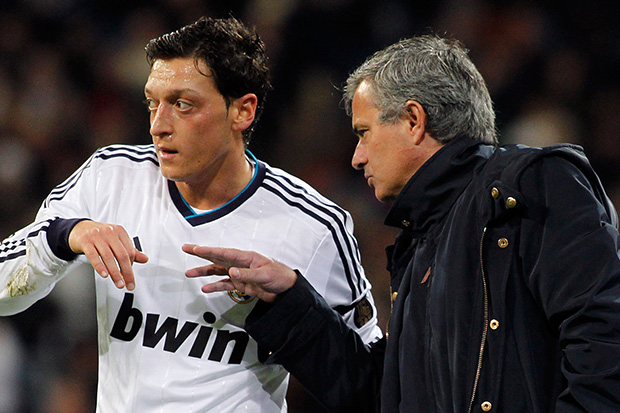 If Ozil does end up joining United it will bring back painful memories for Arsenal fans after they saw former captain Robin van Persie move to Old Trafford in 2012 after refusing to sign a new deal.

We’ll have to wait and see how things develop over the coming months but it’s certainly going to be interesting to see where the German international ends up if he does leave the Gunners on a free transfer next summer.