Arsenal take on West Brom at the Emirates on Monday night. Here is the side Gooner Mac thinks Wenger will select for the game:

Arsenal will be looking to close-in on the top four in the Premier League table when we take on West Brom at the Emirates on Monday night.

Goalkeeper: Petr Cech is set to return between the sticks after David Ospina kept goal against Doncaster last time out.

Defence: Wenger will make wholesale changes to his defence with Per Mertesacker and Rob Holding set to drop out while Calum Chambers is ruled out after picking up a hip injury during the Carabao Cup win.

Laurent Koscielny is certain to get a recall in defence while Nacho Monreal and Shkodran Mustafi should also return as Wenger reverts to the back three that kept a clean sheet at Chelsea last weekend.

Midfield: Hector Bellerin should return in the right wing-back position with youngster Reiss Nelson making way after being handed his full debut last time out.

Sead Kolasinac is expected to come back in to the side on the left while Aaron Ramsey and Granit Xhaka should resume their partnership in the middle of the park after being rested against Doncaster.

Mohamed Elneny will drop out while Jack Wilshere will also make way despite impressing in the League Cup win – which was his first start for the club in over a year.

Attack: Mesut Ozil is back in full training so should be in contention to return in attack after missing the last two games with a minor knee injury.

Alexandre Lacazette should get a recall up front with Olivier Giroud dropping out while Alexis Sanchez could keep his place after coming through 90 minutes against Doncaster unscathed.

Theo Walcott looks to have made a swift recovery from a knee knock but he will have to make do with a place on the bench despite scoring the winning goal against Doncaster.

Danny Welbeck is ruled out with a groin injury that he picked up against Chelsea last weekend and he’s not expected to return until after the international break. 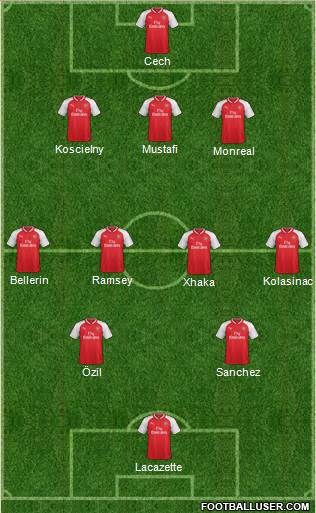