Arsenal take on BATE Borisov in the Europa League this evening. Here is a preview with team news, line-ups and predicted score

Arsenal will be looking to make it two wins from their two Europa League group games when they take on BATE Borisov in Belarus this evening.

We kicked off our campaign with a 3-1 comeback victory over Cologne earlier this month so we can take control of Group H if we come away with another three points tonight.

The Gunners warmed up for the game with a hard fought 2-0 win over West Bromwich Albion on Monday night which saw us move to within just one point of the top four in the Premier League table.

We’ll now face a BATE side that drew their opening group game against Crvena Zvezda so Arsene Wenger knows a victory tonight would put us in a great position to progress to the knockout stages.

With Brighton coming to the Emirates at 12pm on Sunday, Wenger is understandably going to rest several of his key men tonight with the likes of Laurent Koscielny, Aaron Ramsey, Mesut Ozil, Alexis Sanchez, Granit Xhaka, Alexandre Lacazette, Sead Kolasinac, Hector Bellerin and Nacho Monreal all left behind.

Alex Iwobi is ruled out through injury so he joins Santi Cazorla, Francis Coquelin, Calum Chambers and Danny Welbeck on the treatment table.

Youngsters Reiss Nelson, Ainsley Maitland-Niles and Joe Willock are pushing for starts while several other U23 stars have made the trip to Belarus so they’ll be hoping to make an appearance off the bench.

The likes of David Ospina, Per Mertesacker, Rob Holding, Theo Walcott and Olivier Giroud are expected to start while Jack Wilshere will also be given another chance to impress. 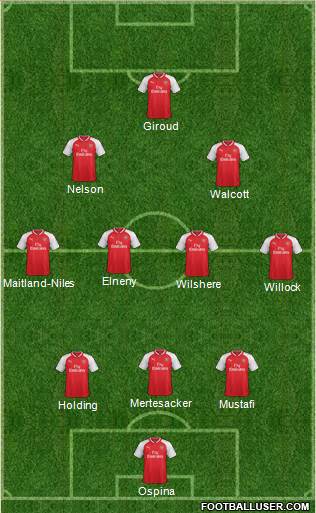 BATE 0-2 Arsenal: BATE have a surprisingly good record in the Europa League having lost just once in their last 12 home games in the competition. However, Arsenal have scored in each of their last 11 away games in Europe so Wenger will be confident tonight. Despite making wholesale changes to the side we can still put out a competitive team that I think we be good enough to secure a 2-0 win.